In Part I, you will remember that Bill Mero offered to take me to the Itcha Mountains where he said, “Chris, I will show you something no man has ever seen”. Well, this was day three, the day I was anxiously awaiting. As usual we were up before dawn, and by the time we reached the high alpine, first light was casting our shadows; guiding us toward the extinct Mt. Fukawi.

I have never really thought of myself as a photo-journalist, but I remember distinctly how I felt that day; riding amidst these volcanic shapes with a man who had travelled through them for years. These were special moments, and I felt that very strongly. I manoeuvred my horse so that the centre of interest became the lead-in line, moving into the space between the two volcanic mountains. 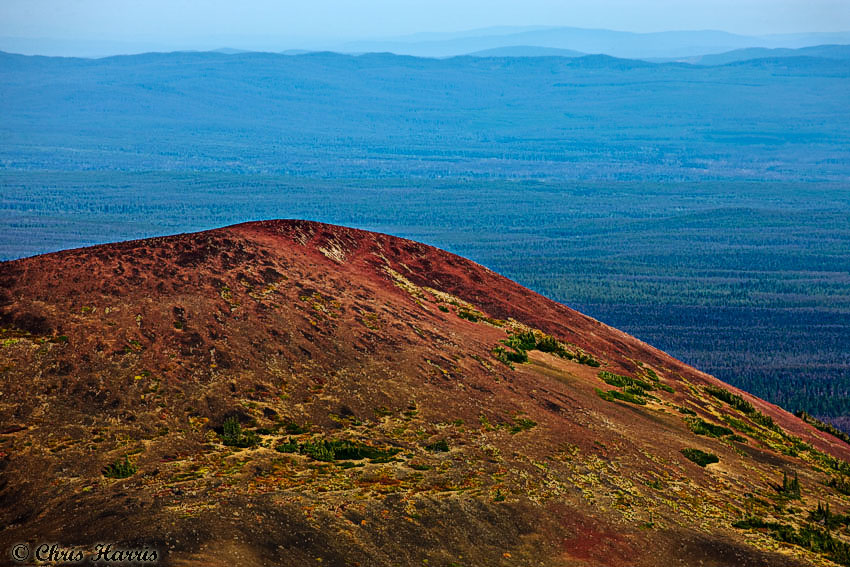 The Mountain that Held the Secret

After looking over the ridge at the beautifully shaped Mt. Fukawi, Bill turned his horse northward and pointed to an old vibrantly red coloured volcanic cone. “That’s where we’re going Chris”, Bill said; “we will tie up our horses down in the valley and climb to the top. From there you will see something extraordinary”.

As we rode off toward ‘the mountain that held the secret’, I was pumped! 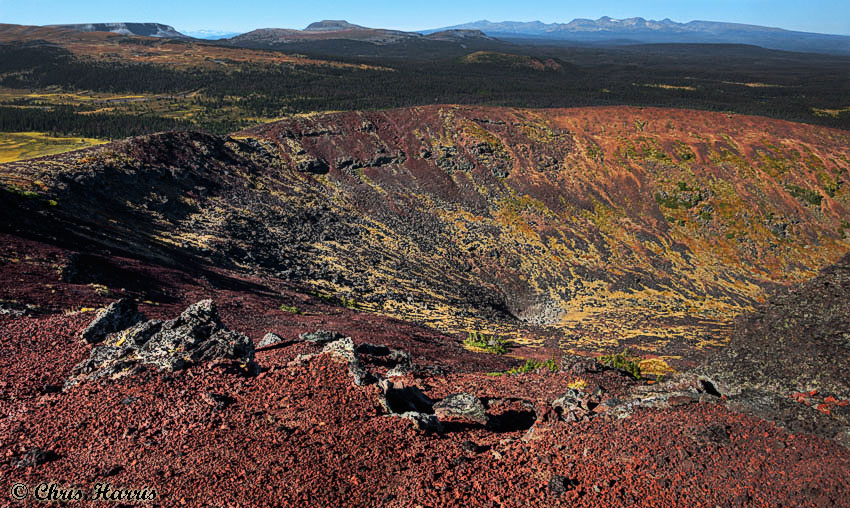 Not knowing what to expect, not a single lens was left behind as we started hiking toward the summit. The only thing I knew for sure, was that I was extremely excited; filled with anticipation.

For me, there is no greater feeling in the world than cresting a mountain pass or summit. We reached the top and when I peered over, I was certainly not disappointed. Before me lay the most amazingly coloured and most beautifully sculpted volcanic crater I had ever seen. You can even see a vent hole at the bottom.

I stood there for a while, trying to absorb the significance of what I was looking at. I studied the light and then hiked east along the crest of the volcano. After making this image (and many more) I thanked Bill for sharing this treasure with me. It was an experience I will never forget.

2. A One Day Hike in Photographic Heaven: Part I 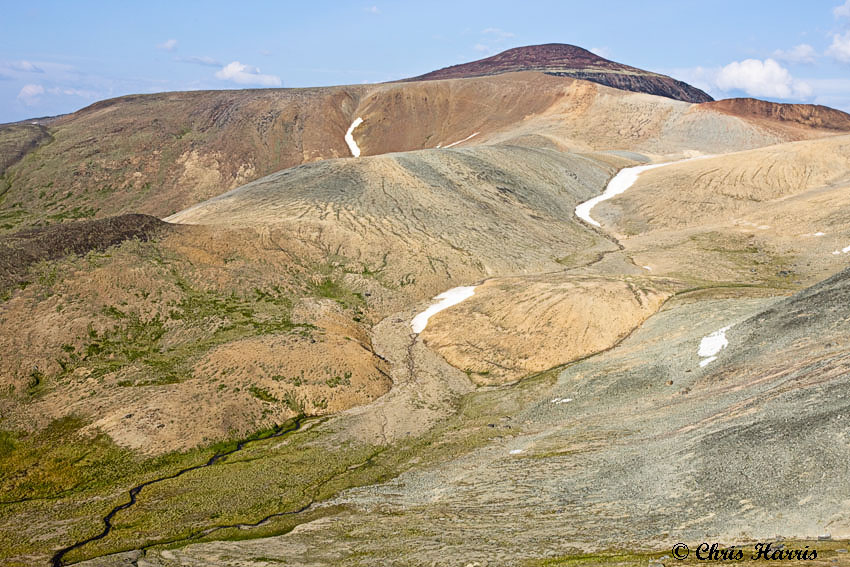 From the ridge above our base camp after an evening photographing mountain goats, I looked out over the landscape toward Itcha Mountain. Although it’s an enticing hiking terrain, I had yet to grasp the photographic potential as I examined the topography, looking for a route for our next day’s hike.

Looking more carefully, searching for those photographic jewels that would keep my mind humming through the night, I was particularly drawn to that large mass of volcanic earth oozing down through the valley from upper right toward the lower left. Slowly the subtle shapes, lines, colours, and textures began to reveal themselves. 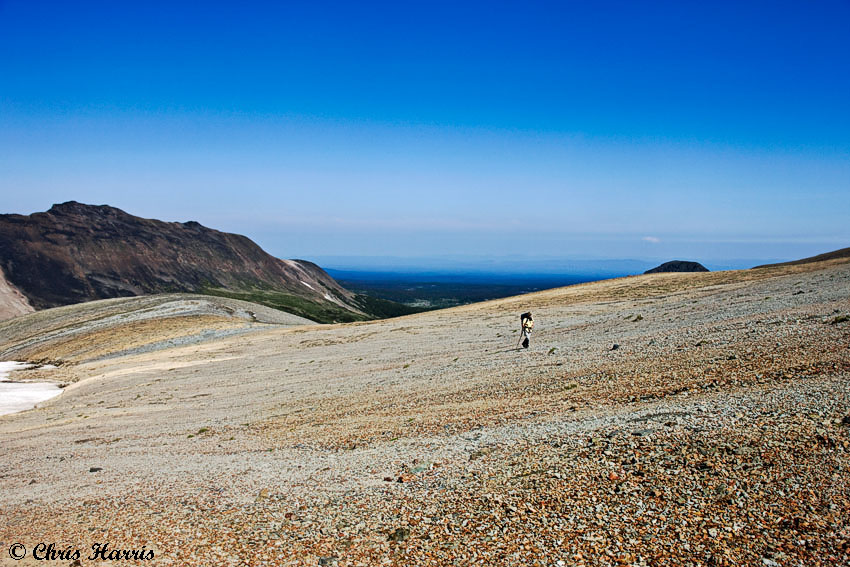 The next morning was a beautiful day as we began our hike up the route I had chosen the night before. To portray the reality of how small Rita looked within this vast landscape, I used my 17-35mm wide-angle lens set at 25mm.

Over the next few Newsletters, I am going to reveal this landscape to you as I saw and experienced it, for it was to turn out to be one of the most memorable days of my life as a landscape photographer.

If you would like to explore and photograph the Itcha Mountains area by horse, contact Six Mile Ranch.

3. The Great Bear Rainforest – Thinking out of the Box

Sailing north aboard the Ocean Light II, admiring the coastal mountains of the Great Bear Rainforest during the waning hours of daylight, I made a few images, as most of us do during a beautiful sunset. During that process, however, my subconscious kicked in, and I heard a faint message saying, “how ordinary”. We have all seen thousands of ordinary sunset images and the ones I had just made were just that – ordinary.

Is there anything I can do, I thought to myself, to express my joy of being where I was and watching what I was seeing, in a way that was not ordinary? I began to push myself visually. I started to experiment. I set my camera at a very slow shutter speed and tried the usual panning and zooming techniques. My camera’s LCD screen told me I was still in the ‘ordinary box’.

Eventually I came up with a technique that produced an image unlike any I had ever made or seen before. I was getting close. I kept refining the technique until I began to get the results that spoke to me. Above is one of the images I felt most happy about. For me, to have come out of the interior plateau country and find myself sailing up the central BC coast on a beautiful 71 ft. ketch rigged sailboat at sunset, was like a dream. This is my dreamscape image. It is the image I made that best expressed my feelings of being where I was.

If you would like to explore and photograph the Great Bear Rainforest by boat, contact Ocean Light II Adventures.