1. Adventures with a Mountain Man

Ten years ago, while photographing on a horse pack trip in the Cariboo Mountains, I met a man who had spent his life in the mountains. He was a man with a zest for life and adventure; he was a storyteller; and his name was Bill Mero. After ten days of riding through the mountains, and evenings spent storytelling around the campfire, we became friends. 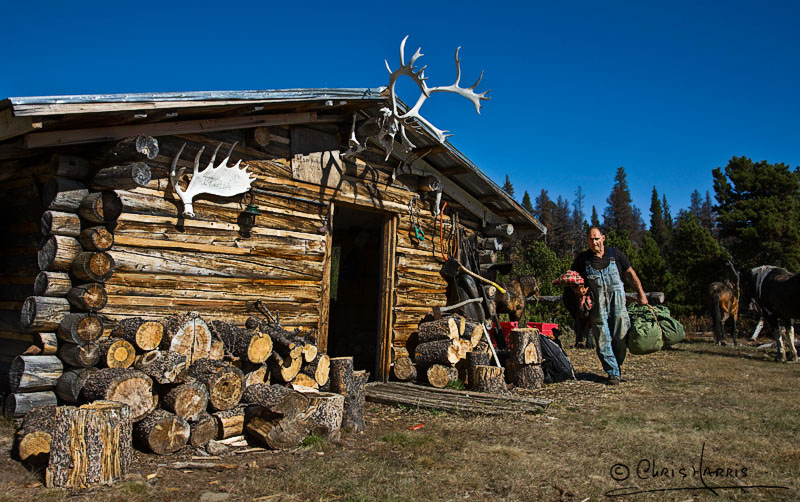 At Home in the Mountains

I stayed in touch with Bill, and when he heard I was doing a book that included the volcanic Itcha Mountains, he offered to take me there. He said, “Chris, I will show you things no man has ever seen”. That, of course, was all I needed to hear! A month later we were off. After riding for 14 hours we arrived at a cabin he helps maintain. This would be our base for the next four days. 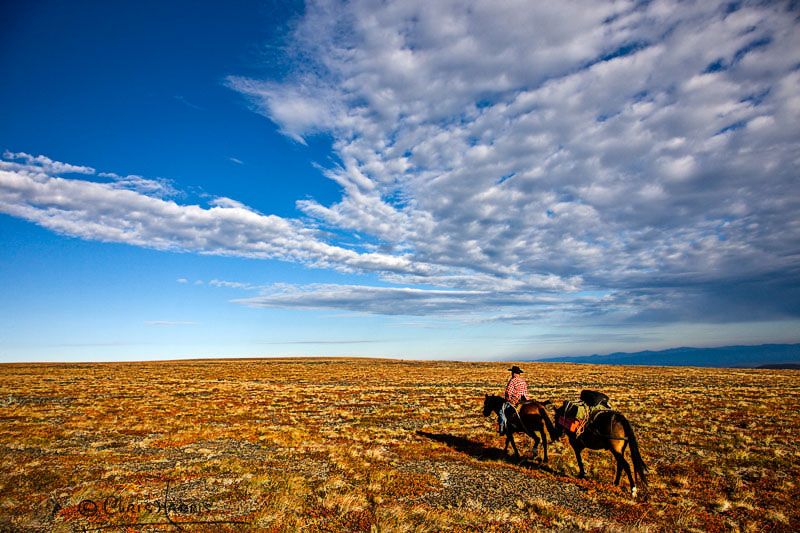 Riding High into the Mountains

Each morning we would rise in darkness, find the horses, saddle up, grab a bite for breakfast, and be off before the sun hit the horizon. It was magical. As the early morning sky shed its darkness, and our long dark shadows began to appear, we were reaching the high country. With camera in one hand, I led my horse to the left to take advantage of the spectacular clouds and the deep shadow of Bill and his horses. It was a day I would never forget.

The Volcanic Mountains in Autumn

For pure landscape images, I asked Bill to stop and hold my horse. With the early warm light; buck brush dressed in autumn colours; and Itcha Mountain in the distance; I knew I had to use my tripod. Bill later commented to me how fascinated he was, watching me set up to make this image. He said, “you had everything ready and then you decided to move your tripod about 6 inches to the right. How could 6 inches make a difference when looking out over this vast landscape” he asked, laughing. Good question. When I thought about how it must have looked to him, I laughed myself. In this image, the placement of that strip of grass in the lower right is critical to leading one’s eye into the image toward the red buck brush and then off across the meadow toward Itcha Mountain in the upper left. Every inch does make a difference! In my next Newsletter, I’ll take you to Bill’s secret discovery, a place where no one has been before.

2. A Feast of Salmon 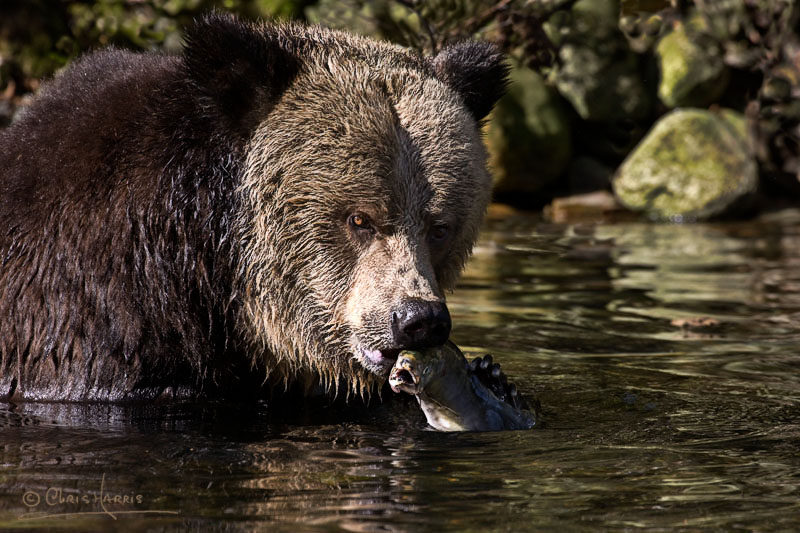 While sailing along the central BC Coast in an area known as the Great Bear Rain Forest, I had the privilege of watching and photographing grizzly bears along the shoreline. With one eye on me, this gorgeous grizzly began to eat a salmon that would help provide fat and nutrition for the long winter season ahead. 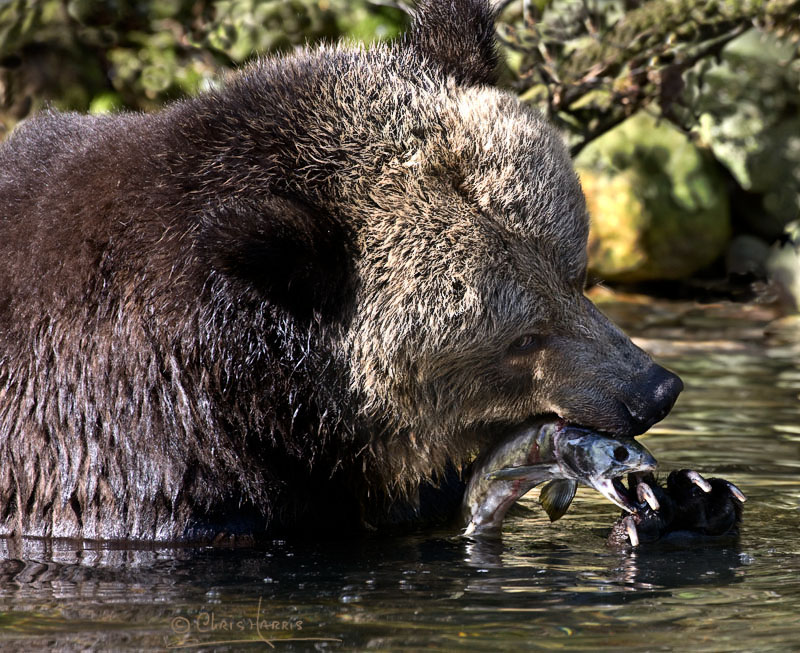 Still with an eye on me, the grizzly continued to eat. What I found amazing was how calm, gentle and dexterous the bear was while handling a flapping fish with one huge paw. It was a privilege to be there with such a beautiful animal.

If you would like to explore and photograph the Great Bear Rainforest by boat, contact Ocean Light II Adventures.

3. Ever wonder where you are? 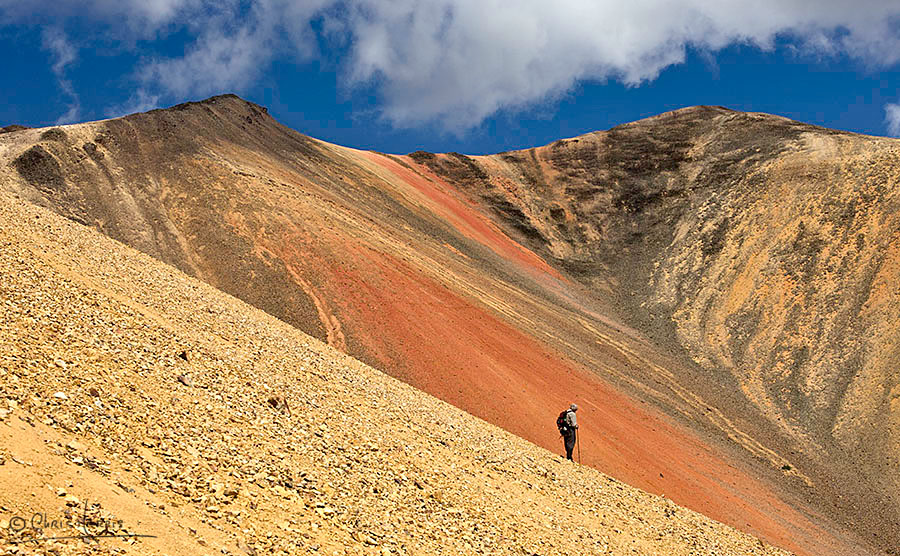 We were hiking in the Painted Mountains of Tweedsmuir Park but we could have been on another planet. The setting, the colours, and the remoteness; there was not a sign that any human had ever passed this way before. With camera in hand, I once again stayed well behind the others, always manoeuvring myself to a position where I could capture a poignant moment. When the power of this incredible landscape became overwhelming to Mike, he stopped to contemplate where he was, and what he was doing. It was that moment, and that thought, that I tried to capture here.

During the day of hiking described above in #3, I saw this young buck nestled into his foot-carved bed, eating what must have been lichen on the volcanic rocks. At that time, because he blended in so well with the landscape, I didn’t feel it warranted a photograph.

While hiking back to camp, however, we rounded a ridge and unexpectedly disturbed him, sending him on his way. Serendipitously, he wandered toward another ridge, back-dropped by a huge valley deep in shadow. Realizing the photographic potential of this high contrast scene, I dropped to my knees in an attempt to get his head above the ridge line. Serendipity, perfect light, and recognition for the potential of a great image, led to this capture.