Enjoy the Newsletter, and pass it on to interested friends. Our goal here at the Chris Harris Gallery is to share the creative process, promote the arts, and strengthen our artistic community. Thank you.

1. The Power of Positive Thinking. It Really Works!!

On the 3rd of July, my wife Rita and friend Mike drove 500 kms. west into the remote Chilcotin region of British Columbia. At Anahim Lake we turned north and eventually arrived at Six Mile Ranch where we were greeted by outfitters Wanda Dorsey and Roger Williams.

I had come to photograph a specific area in the volcanic Itcha Mountains and Wanda and Roger were to support us by carrying in our camping and photographic equipment by horse. 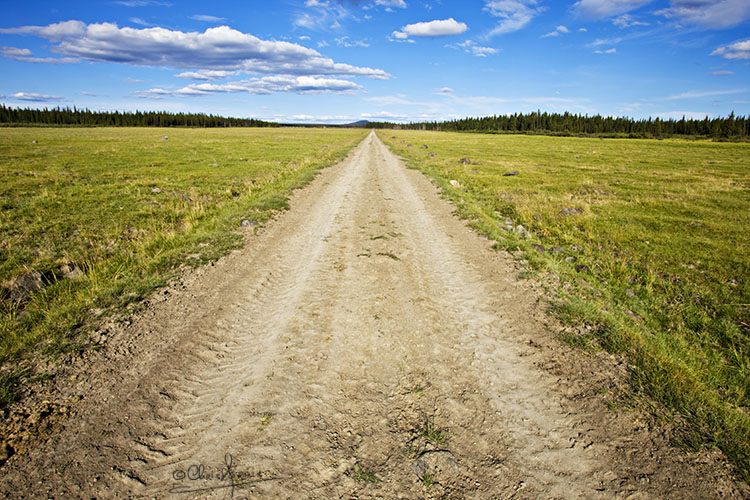 The road above is the view from the ranch as we started on our two day trek toward Ptarmigan Basin, our predetermined rendezvous spot.

One of my wishes on this trip was to photograph caribou within their native volcanic landscape. On two previous trips to the Itcha Mountains I had only seen a total of two caribou; I was developing a reputation! Then last year, when I was here shooting for BC Magazine, Roger described having seen on his previous trip hundreds of caribou here at Ptarmigan Basin; caribou so close people were using wide-angle lenses.

All winter long, I imagined hiking to the rim of Ptarmigan Basin where I would look down and see THOUSANDS of caribou. I visualized a ‘Serengeti’ of North America. Confidently, I even told my friends what I was going to see there. 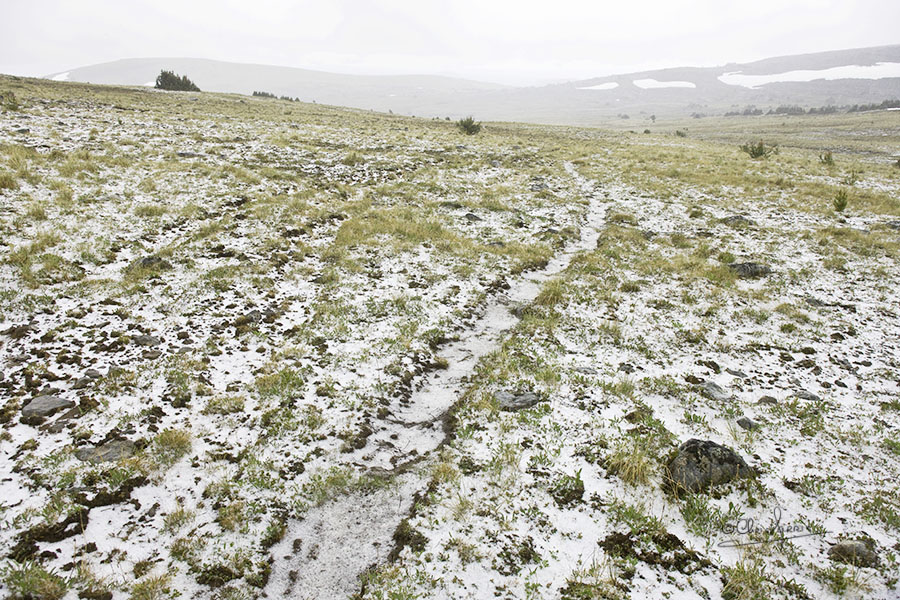 Where are the Caribou?

At noon on day two a storm rolled in; rain and then snow. We were heading over a small pass which would lead us to the spot where I was to see THOUSANDS of caribou. My optimism was being tested! I snapped the above image and pushed on. 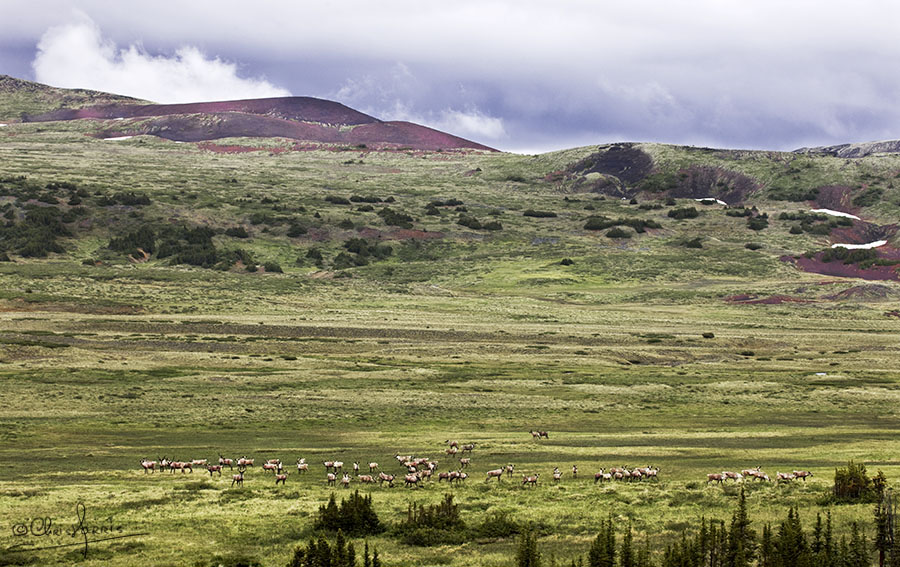 There they are – Amazing!

Before long, we came to the rim and I scanned the Basin. There they were. Not quite thousands but HUNDREDS! With tears swelling in my eyes, I looked back at Rita and Mike and gave the ‘thumbs up’. It was amazing. 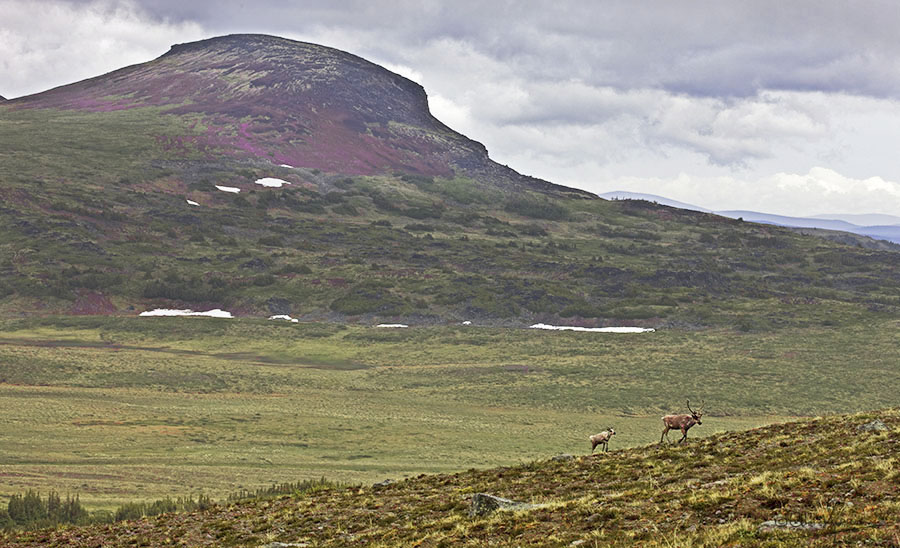 Caribou in the Volcanic Itcha Mountains

I was looking at several herds in the Basin when I noticed another herd off to my right. Miraculously, the snow and rain subsided, allowing me to shoot more freely. Seeing a bull caribou coming up the ridge, I ran up the mountainside myself so as to get a volcanic mountain in the background.

Hundreds of caribou followed, heading toward a large snow pack. I moved quickly and positioned myself to catch the action. As caribou are so well camouflaged within this vast landscape, I knew this was a special opportunity. 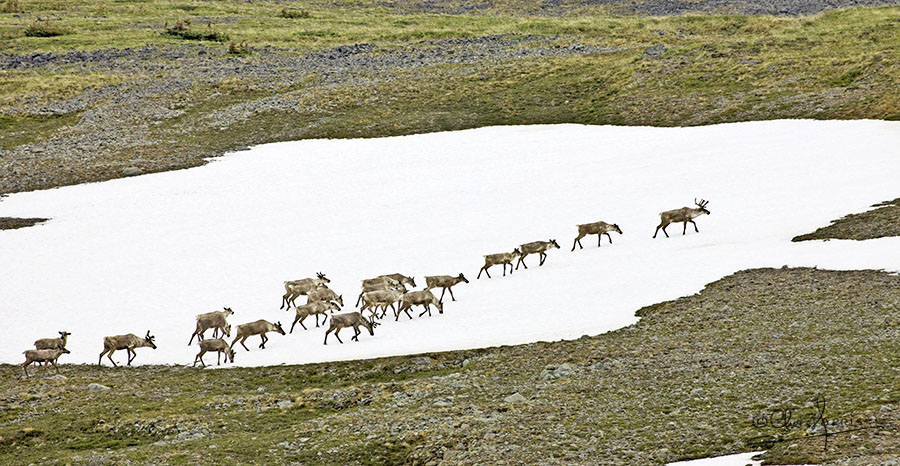 Having captured images to indicate the number of caribou, I changed to a longer lens so as to isolate a small group crossing the snow.

What a start to the trip! Even though the weather wasn’t the greatest, I was on a total ‘high’!

Soon after, Wanda, Roger and the horses arrived with all our extra backpacking gear. They would continue on. The plan was to meet them in seven days. We were now on our own.

In my next Newsletter, I’ll share our next adventure in the Itcha Mountains!

Exploring and photographing the Itcha’s would not be possible without the generous help, and expertise of Wanda and Roger of Six Mile Ranch. If you care to explore this part of the country, there isn’t a better way to do it. Their web site is: www.six-mile-ranch.ca

In Newsletter # 47, I shared a few Yellow Glacier Lily images which were made in the Trophy Mountains in Wells Gray Park. Taken in June, they represent the first major wave of alpine flowers each year. I returned to the same meadow during the first week of August in hope of catching the second wave of colour. 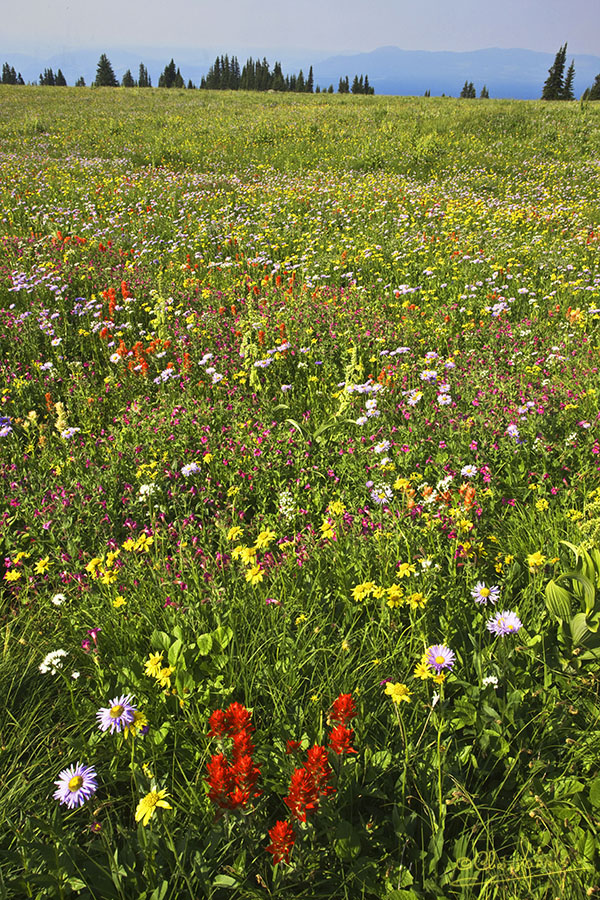 Unfortunately, the peak of colour had passed; the lupins had already turned to seed. My next option was to find a concentrated patch of remaining colour.

The traditional way of capturing a grand vista such as this is to use a wide-angle lens, aim it down toward your feet, and include only a sliver of the not-so-important sky. The key to success with this style of image is to have an ‘eye-grabbing’ foreground. I was fortunate in finding a small clump of paintbrush; more intensely red than any of the others.

As you look at this image, note how your eyes travel through the picture space. They don’t wonder aimlessly in the centre of the image; they start with the prominent foreground and then sweep all the way through the landscape to the skyline before returning.

While photographing the flowers, I heard two White-crowned Sparrows chattering around me. After quietly changing lenses, I chose an aperture that would both blur the background and ensure the entire bird was tack-sharp. The timing on releasing the shutter is based on capturing the sun’s glint in the bird’s eye.

Once I had made my traditional style images, I decided to experiment. 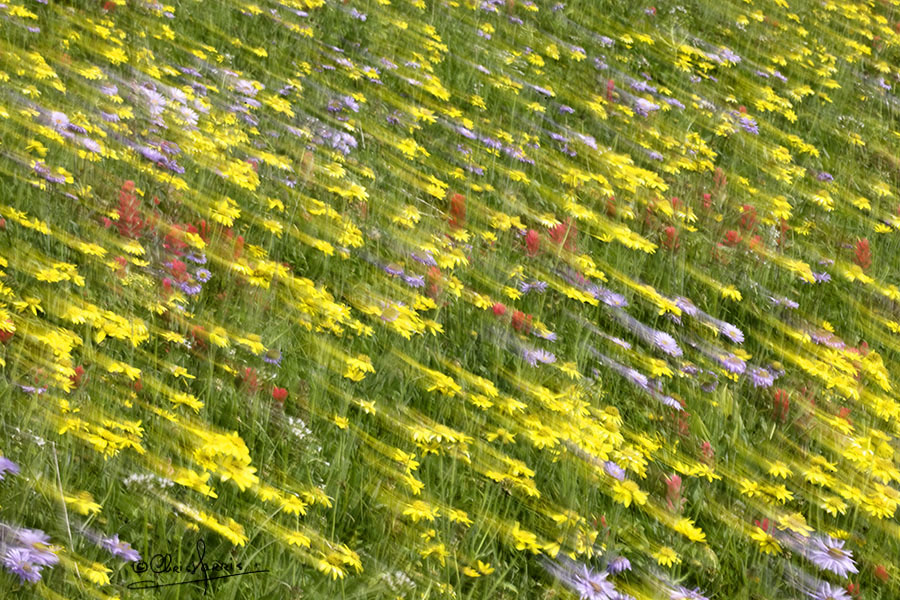 Racing to the Finish Line!

If I had just panned my camera during a two-second exposure, the flowers would have been coloured streaks. To show that the streaks were in-fact flowers, I kept the camera still during the first second of exposure and then panned slightly during the second second of exposure. I had never tried this before. 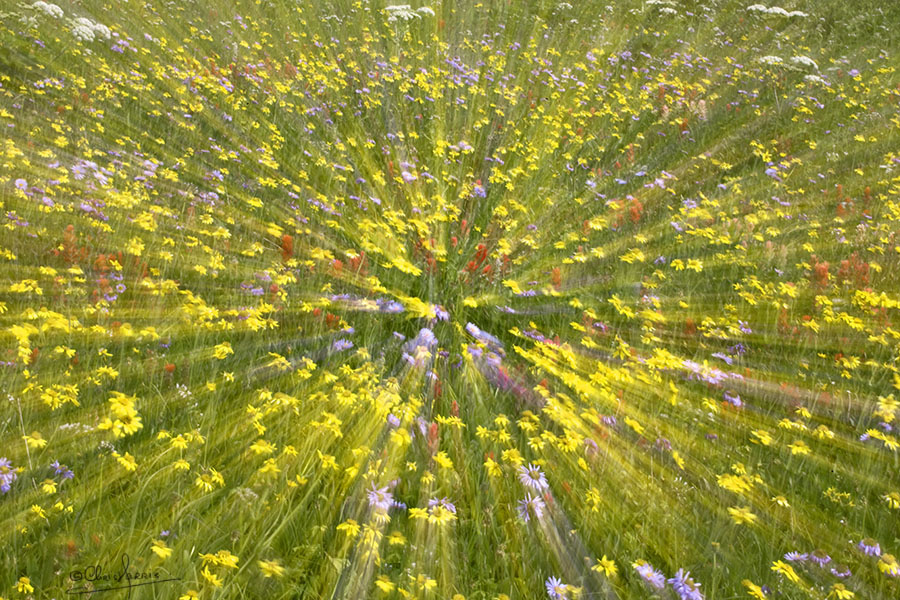 Using the same technique as above, I zoomed my lens during the second second of exposure. The beauty of digital photography is that experimenting like this is free. Just allow yourself to ‘go wild’ and you may be surprised with the results. I was.

3. A Note for Photographers

Several Newsletters ago, I stopped including the technical notes at the bottom of each image. However, after several requests to include them, I started to do so once again.

In many instances, these notes are very misleading, so in future, I will include them only when I feel the information is of value to photographers.

For example, should a new photographer see that ‘Mountain Splendour’, above, was made at ISO 400, he or she might assume that 400 must be the best ISO to shoot wild flowers. This is incorrect, for there are often factors at play in the field that someone at home is unaware of. A slight breeze, absence of a tripod, or whether my camera/lens has image-stabilization or not, may force me to up my ISO beyond my preferred setting of 100.

In other instances, such as with the abstract flower images above, the technical information is important. So in future newsletters, I will share this information whenever I feel it is of value to photographers.


Get notified when a new newsletter appears on this site