Enjoy the Newsletter, and pass it on to interested friends. Our goal here at the Chris Harris Gallery is to share the creative process, promote the arts, and strengthen our artistic community. Thank you.

After years of resisting, I was convinced by my old friend and roommate, John Baxter, to attend my 50th high school reunion at Rothesay Collegiate School near Saint John, New Brunswick. So on the 16th of June, Rita and I headed off to Moncton to visit John and his wife Judy. Stories, laughter, fresh lobster and a few Moosehead beer for old time’s sake had us feeling like kids again. 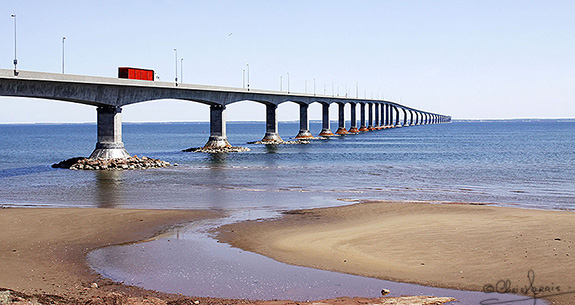 As this was not a photo trip, I travelled with my light 50D camera body and shot only in jpgs with a single 28-135 lens; just enough to record the journey. John & Judy surprised us with a drive to Prince Edward Island across the new Confederation Bridge. It felt strange taking snapshots and without a tripod, but it was freeing and fun. I still, however, found myself making the same conscious decisions and paying close attention to composition. The lines of the bridge were beautiful, and to give it context, I carefully choose a foreground with sweeping lines in the sand that leads one’s eyes out to the bridge. For added interest I waited for a vehicle. It was pure good fortune that a freshly painted red truck came by; all I did was wait for the perfect compositional moment.

A beautiful drive through a rural farming landscape took us to Cavendish Beach where I had played all summer on a family vacation in 1950. The angle of the sun made this panorama of the red coloured rocks the only possible image; behind me was the world famous Cavendish Beach; miles of beautiful red sand.

Beach on the Bay of Fundy

The next day had us driving along the scenic Bay of Fundy Coastal Drive. Making many stops along the way, we enjoyed galleries, historic sights, lighthouses and of course the famous Hopewell Rocks.

After a wonderful school reunion with old classmates, we flew back to Vancouver. As we drove home through the Fraser Canyon and up onto the Cariboo Plateau we realized to what extent our five-day Maritime experience had affected our perspective of British Columbia. We couldn’t help but appreciate the diversity of our country and reflect upon the value of our friends. 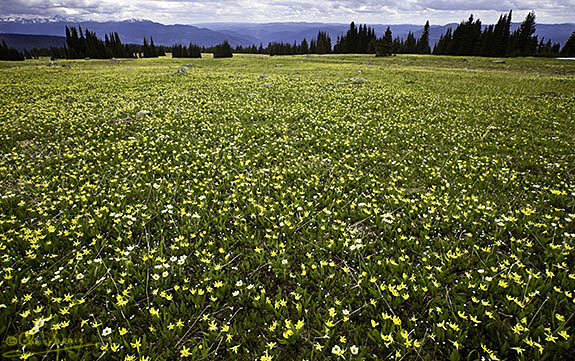 Two days later I was back working on my latest book project. In contrast to walking the Maritime’s sandy beaches, I found myself hiking and photographing amidst carpets of Yellow Glacier Lilies in the alpine meadows of volcanic Wells Gray Park.

Although the lilies were about four days past their prime, the vista’s in all directions were beyond belief. In order to capture the magnitude of flowers I used a fairly wide angle lens and aimed it down toward my feet to emphasize vegetation rather than sky.

As maximum of depth of focus is the most important ingredient in this image, I shot at f22 on a tripod. A slight breeze forced me to up my ISO to 400 so as to keep the wavering flowers sharp. 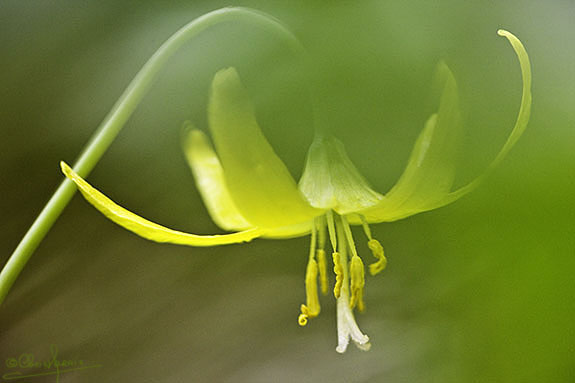 Once I had captured the grand vista of flowers, I changed to my macro lens and dropped onto my belly to explore the always exciting and more intimate world of close-up photography.

One of my favourite close-up techniques is to shoot my subject through vegetation with a very shallow depth of focus. This softens the images while focusing your attention on that which is sharp. This is a technique I learned back in the early 1970’s from Freeman Patterson. I mention this because I visited Freeman last week while in New Brunswick. His inspiration has played a huge role in my photography over the past 40 years.

In this image I took a more documentary approach by including more of the flower and part of its stem, and by showing the flower in slightly greater focus. By closing the aperture from f2.8 to f5, I added more detail to the background, but not enough to distract from the flower of interest. Note the placement of the out-of-focus lilies in the background. The goal is to have the viewers eyes wander around the entire image while always returning to the main centre of interest.

2. Early Bird gets the Fish.        Early Photographer gets the Image! 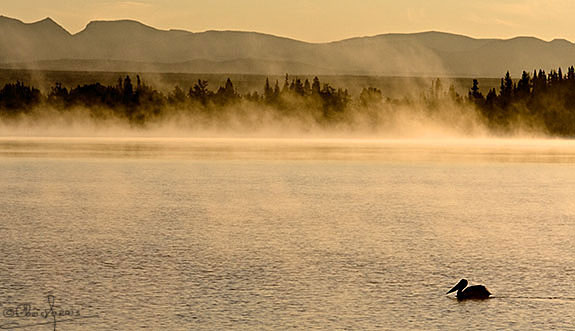 Last fall, Petrus Rykes invited me to shoot the volcanic Itcha Mountains from his very picturesque Eagles Nest Resort on Anahim Lake in the West Chilcotin. As the magical light of dawn began to unfold, I noticed this single pelican out fishing for its breakfast. To capture the overall setting, my first image included the Itcha Mountains where I had just returned from a ten-day shoot. 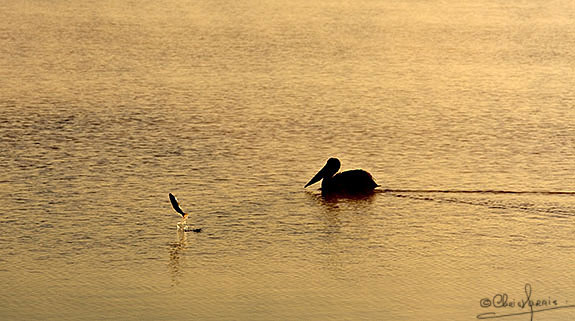 Next, I zoomed in and made a few images. Suddenly, while still looking through the viewfinder, a fish flicked its tail and jumped from the water. I snapped the shutter and then anxiously looked at my LCD screen to see if I had captured the moment. Good fortune as well as great light had shone on me that morning.

I’m not sure if the early bird got its fish that morning, but the early photographer certainly got his image!

3. The Moods of Pipe Organ Mountain 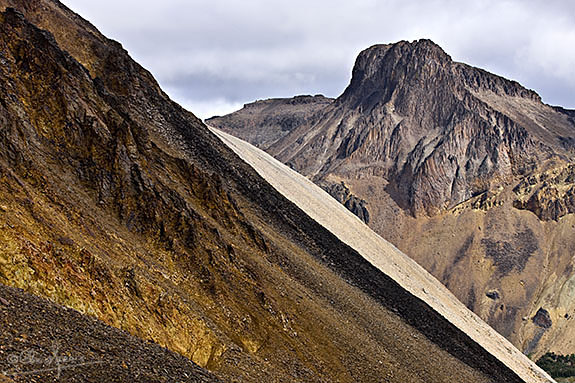 Pipe Organ Mountain is situated in the Ilgachuz Mountains about 30 kms north of Anahim Lake on the west Chilcotin Plateau. These mountains are in fact part of an extinct shield volcano in which Pipe Organ Mountain with its distinctive volcanic features, is the dominant feature. 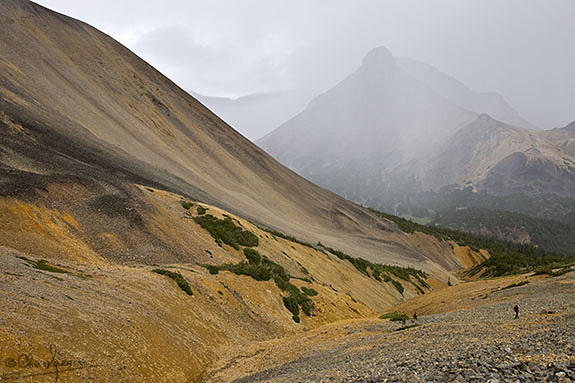 Rita, Mike and I had established a photographic base camp beneath Pipe Organ Mountain, from which we day-hiked in every direction. Wherever we went, it seemed that the changing moods of Pipe Organ Mountain had my visual attention and interest. In the above image, an August snowstorm shrouds the mountain while Mike, hiking in the lower right, gives perspective to this massive volcanic landscape. 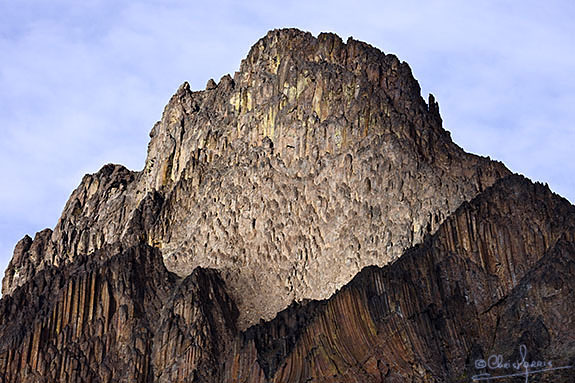 One day found us enjoying lunch at the very base of the mountain. The day was windy with quickly moving clouds, and shafts of light seemed to bounce from one spot to another. I had no sooner said to Rita and Mike, “wouldn’t it be amazing if a shaft of light lit up just the top volcanic features”, when suddenly it did just that!

The visual separation between the organ pipes below and the more nodular features above makes this one of my favourite images of the mountain.

Hey, who says that the universe is not a living organism that feels what we do and listens to what we say!

In Newsletter #46, I erroneously called this marmot a Hoary Marmot. Thanks to my many natural history friends, I stand corrected. This was a Yellow-bellied marmot living on a lava talus slope below Dog Creek cliffs, high above the Fraser River.


Get notified when a new newsletter appears on this site