2.  Fly Fishing on the Blackwater River: It doesn’t get much better than this.

3.  Responding to that which Moves you:  Pushing Beyond the Documentary.

4.  Photography on the Mitchell River: This was Wild!!

5.  Composition:  How One Foot can Make a Difference

6.  Flyover Presentations near you:  Please join us.

This past summer Doug Green and I ran a photographic tour and workshop along the mid Fraser River Canyon. Photographically, we journeyed  through  landscapes that evoked wide swings of emotional response. The river would vary from slow meandering currents alongside  sandy beaches,  to fast moving rapids through narrow passages; and the landscapes would change from rolling grasslands to high contrast canyon walls.

Emotion and enthusiasm are important and necessary  ingredients when making powerful imagery, and believe me, we sure felt those emotions as we traveled down the Fraser River.

The challenge was in recognizing compositional elements and then making quality images quickly. Elements such as contrast and tone, form, line, balance, focal length and shutter speed, had not only to be recognized, but decisions on how to utilize the benefits of each had to be made in seconds. 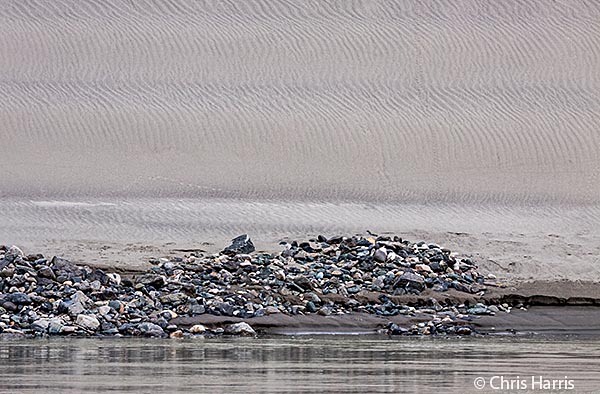 Shooting toward shore I 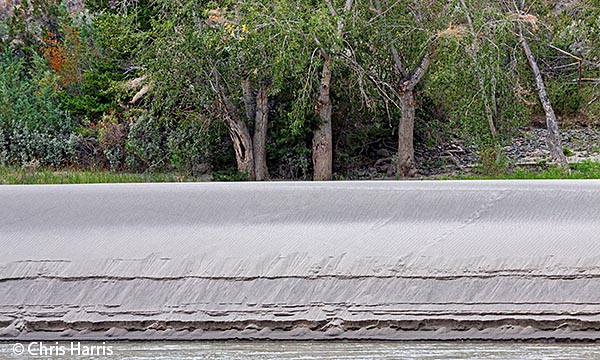 Shooting sideways toward shore: This reminded me of the speed of aerial shooting.

The tendency is to become a snap shooter and end up with record shots. There is nothing wrong with that, but while shooting from the air, I found that if I concentrated entirely on compositional elements, rather than the overall view, I could create quality imagery. 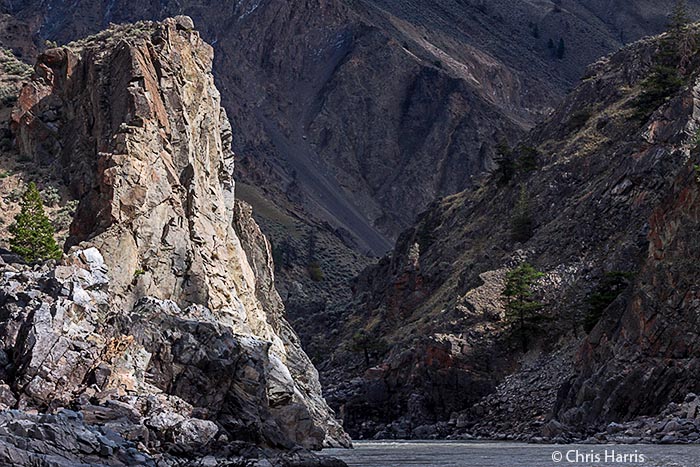 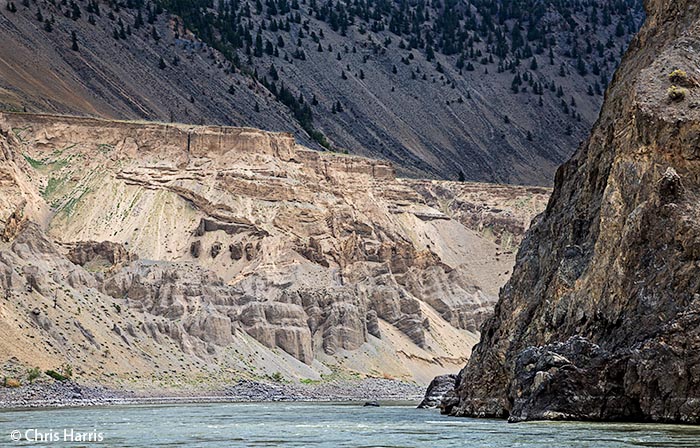 Shooting in front of or behind the boat: When shooting fore and aft, I concentrated mostly on the tonal range and high contrast of the canyon; with the weather usually sunny, dramatic lighting occurred naturally as we wound around corners and through canyon walls.

Doug and I will operate this tour/workshop again in 2013. For details visit:

2.  Fly Fishing on the Blackwater River: It doesn’t get much better than this.

It was a beautiful day on a tranquil river. To be here was both a fly fisher’s and a photographer’s dream. 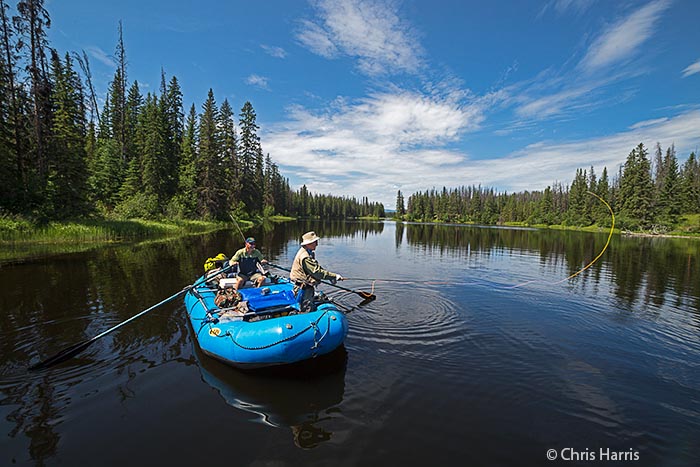 Fly Fishing on the Blackwater

As I mentioned in my August Newsletter, I found the photography extremely challenging on this trip. There were so many variables that needed to come together to make a reasonable photograph, and I usually was in charge of none of them! There was the positioning of both rafts, the angle of the raft I was shooting, and capturing the fly casting so that the line was recognizable. Those were just a few of the challenges. 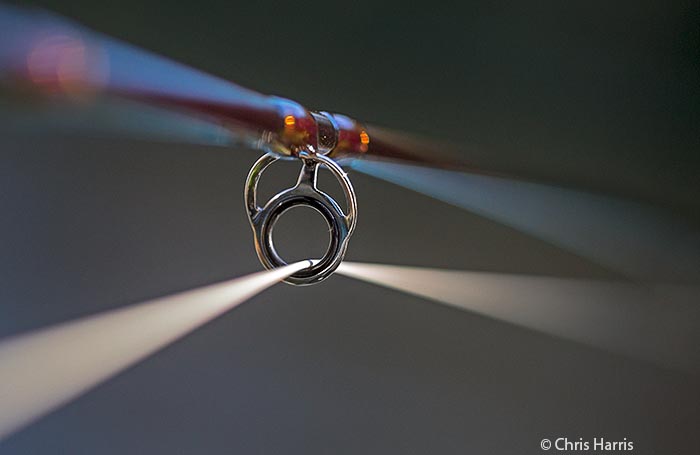 Have a beer and photograph a fishing rod!

While sitting around the campfire enjoying a beer and chatting, I caught the glint of a fishing rod leaning against a tree. Suddenly, an idea! I got my camera, put on a macro lens, took the rod and my chair down to the river where there was still some evening light, and began to explore. The image above is one of many fly rod abstracts I made.

3. Responding to that which moves you:  Pushing Beyond the Documentary

This past summer I was photographing on a Kumsheen raft trip. It was a trip designed to explore the natural history of the lower Thompson River between Ashcroft and Lytton.

On the last day, we stopped beside Nicoamen Creek for lunch. As soon as I had eaten, I did my usual ‘fade’. Quietly taking my camera bag, I headed off to explore. Up the creek toward Nicoamen Falls I found a pleasing composition and made the above image.

I knew  that lunch break would turn into a social hour, and give me more time to photograph. So, should I wander further up the creek and look for a new composition, or, should I stay put and push myself visually?

I decided on the latter and created the image below by making a multiple exposure. 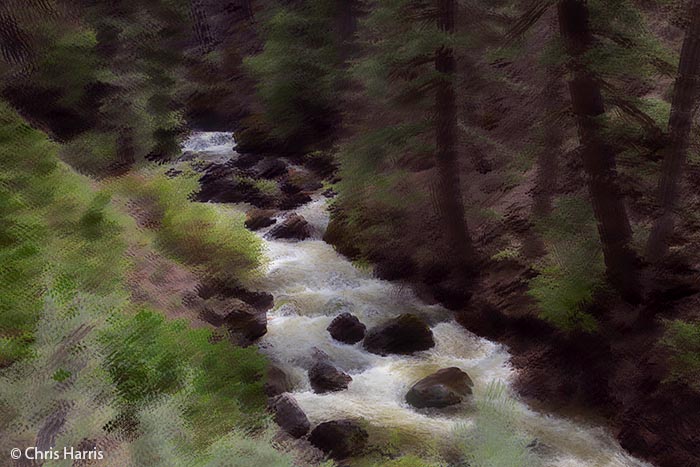 4.  Photography on the Mitchell River: This was Wild!!

The plan was to photograph a fly fishing expedition on the Mitchell River, a spectacular river which flows out of the Cariboo Mountains and into the north arm of Quesnel Lake. Doug Mooring and Josh Mackenzie of Cariboo Rivers Trout Fishing were the trip fishing guides while three gentlemen from Washington State were the clients. I was contemplating a peaceful meander up the river with fly fishers casting amidst the tall cedars of the rainforest. 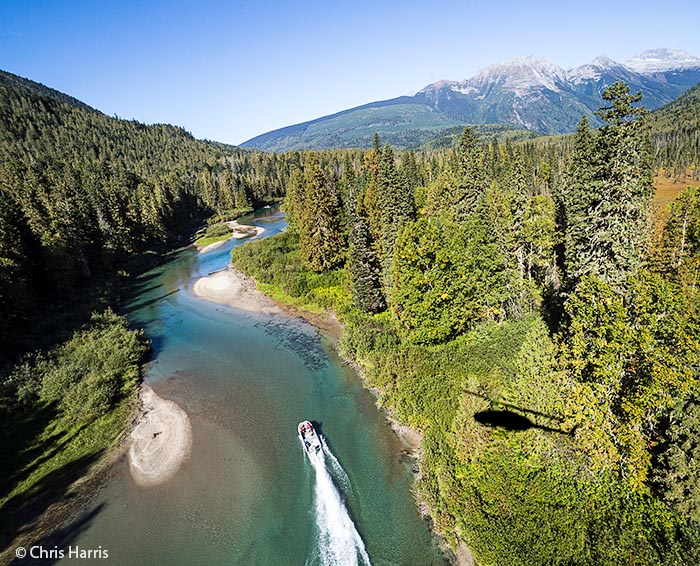 I love shooting from helicopters!

That thought quickly ended when Doug’s friend Kelly Croswell of Frontline Helicopters flew in. Suddenly there was a new plan;  shoot the fishermen as they travelled up this beautiful winding river set against the magnificent Cariboo Mountains. Before I knew it, the two boats were off upstream, the back side door was removed from the helicopter, and we too were off.

Fortunately, after a year of shooting my aerial book Flyover , I felt right at home. I just cranked up the ISO, upped the shutter speed, leaned out the door, felt the wind in my hair, and excitedly began to photograph the story. Wow…the adrenalin was flowing! 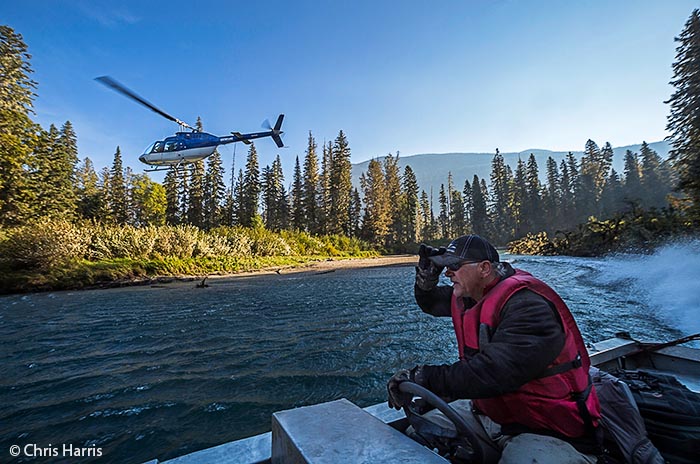 The next day we decided I would photograph the helicopter from the boat. As it turned out, this was even wilder and more risky than shooting from the helicopter. For this shot I was lying on the open front deck of the boat, leaning out over the side to get both Doug and the helicopter in my image. The water level was very low so we had to travel at high speeds to stay above any rocks or tree trunks below waterline. So when Doug yelled “hold on, we might hit a tree”, I was so caught up in the excitement, I just kept shooting. I got my shot (above), but if he had hit the tree, and the boat suddenly stopped, I would have ended up in the middle of the river, 50 metres upstream! Good work Doug!

5.  Composition:  How One Foot can Make a Difference

On the same Fraser River photo workshop mentioned above, the opportunity to learn more about composition and creative photography took place at our base camps. Here we could set up our tripods to better identify and understand the elements of composition.

Captivated by the erosive power of the river and the hole in the rock, I set up my tripod and composed the image below. 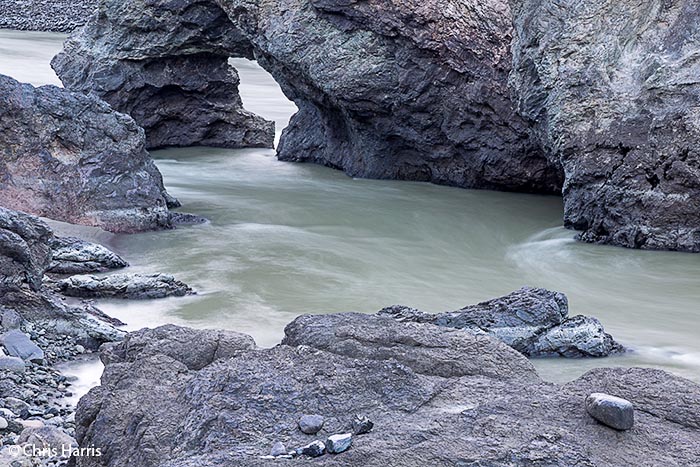 A minute later, I moved my tripod one foot closer to the cliff’s edge, and with the same intent, made this  second composition.

If composition is a way of guiding the viewer’s eye in a way that the viewer understands the purpose of the image, then by moving my camera one foot, I had  changed the purpose behind making this second image. I didn’t realize what a change that foot meant to the composition until I examined it at home on my monitor. 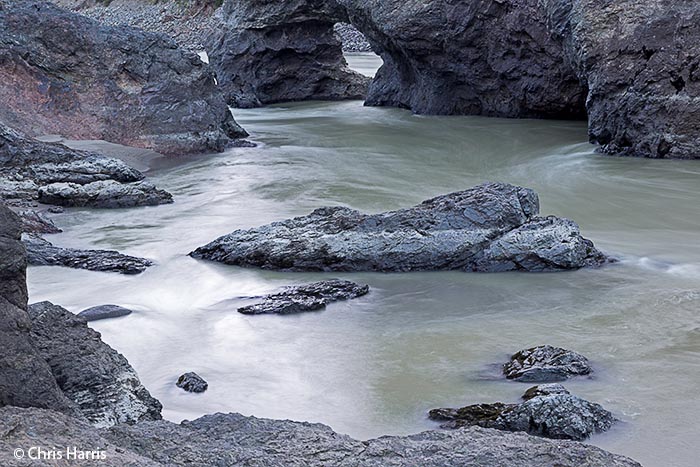 How do your eyes wander through these two images? Try critiquing your own photographs; it will help you make better images in the field.

6.  Flyover Presentations near you:  Please join us. 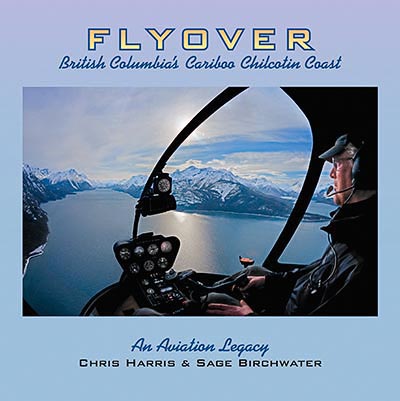 Since launching Flyover here at the 108 Airport Hangar on September 29th, we have travelled to Williams Lake, Anahim Lake, Bella Coola and Port Moody.

The response to this important story in Canadian aviation history, and the way we have captured and preserved it, has been a reward for all who participated in the book’s creation. It is also a confirmation of the vision and passion of all the pilots who generated the idea for this book and who flew to make it a reality.

Flyover is a remarkable story about colourful and intrepid aviators who flew in remote and dangerous lands. Their story is one of the most exciting in aviation history, and an era fast fading.

We proudly invite you to visit our booth at various artist/artisan shows, or at one of our presentations.

Please check the Appearances Page on my website for one near you.