Actually, you already have! This is the inaugural Newsletter from our new site, and new mail-out system.

Our hope is that we have made the various features faster and easier to get to for everyone, ourselves included.

With this Newsletter behaving more like an e-published magazine, the new blog is designed to be more immediate, shorter and more frequent. In it Chris will post tidbits that are too good to make wait. To stay connected, find us on facebook and don’t be shy about ‘commenting’; we want to hear from you!

We hope you like the new look, and please send us questions or queries about anything you see here. 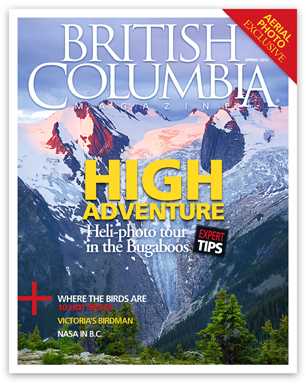 This month, British Columbia Magazine has featured a photo essay and story based on my new publication Flyover: British Columbia’s Cariboo Chilcotin Coast which is to be released this October. The story titled “Flight Plan” was written by Sage Birchwater who is co-authoring the book. 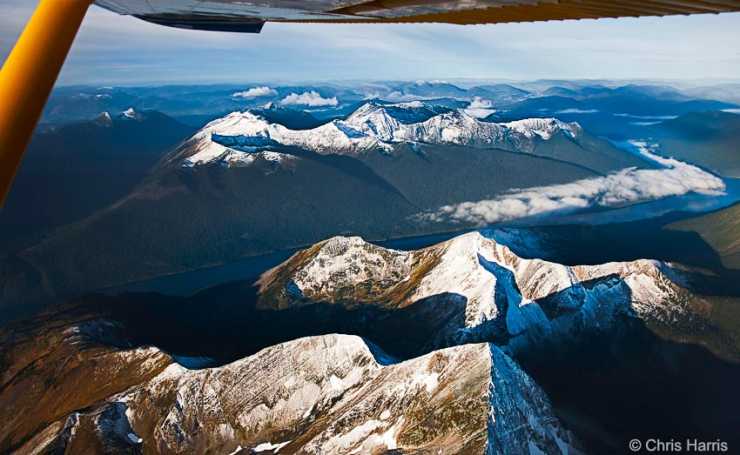 View over the Cariboo Mountains & Bowron Lake Park  © Chris Harris
Photographer’s notes: Never knowing exactly what images will be required when putting a book together, I try and cover all bases when I am shooting. Sometimes I included the wing, and others the wing and strut as I did in this image above. It says something a little different from the view alone. So this image is a reminder to all of us who undertake any photographic assignment – small or large – to shoot from as many different perspectives as you can think of. Within any subject theme, there are untold angles and stories to tell. Canon EOS-1Ds Mk.III, iso 800; f-8; 1/1600 sec; 24-105mm lens.

You can also check out the magazine online. There is a short story under “current issue” and a link to a photo essay titled “aerial images of the Cariboo Chilcotin Coast” on the Home page.

3. About the Fraser River Photo Tour/workshop:  Part I – The Joy of Sharing 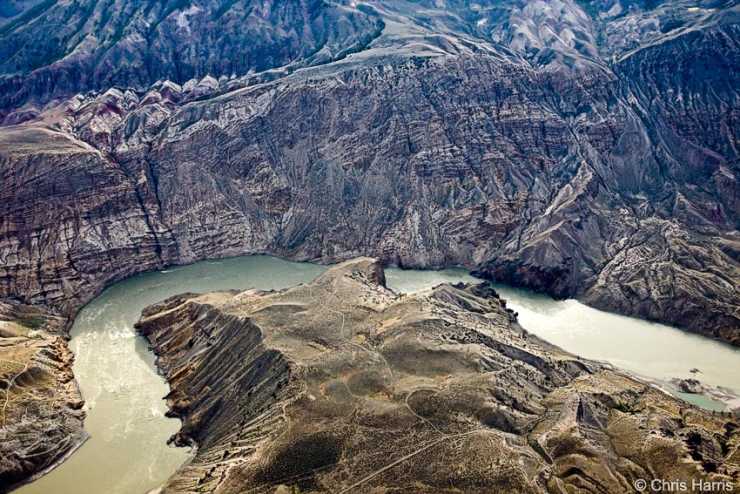 As I contemplate the upcoming Fraser River Photo Tour/Workshop, I find myself thinking about why I feel so passionate about wanting to share this particular trip.

When I first came to BC in 1969, I immediately starting exploring wilderness areas around Vancouver, where I had a teaching job. I was puzzled  to only find Europeans in all these beautiful places. Where were Canadians, or at least British Columbian’s?

When I excitedly told others about my unbelievable discoveries, they just looked at me as if I were from another planet. To make a long story short, I, along with another  friend from Eastern Canada, started the very first B.C. adventure tour company, EcoSummer Expeditions. People joined us to sea-kayak, hike, and photograph in areas such as Haida Gwai, Edziza and the Spatsizi.  We just felt compelled to share the most spectacular parts of B.C. that we had discovered.

I guided such tours, of which many were specific photographic tours and workshops, for 35 years. The feeling of excitement at seeing a new and beautiful place for the first time was always so strong in me that I have always wanted to share that feeling with others.

The central Fraser River canyon is one of those exceptional places where few have ever set eyes on.  I travelled the route of this tour many years ago and I have never forgotten it. It is staggeringly beautiful with wildlife thrown in as an extra. When Douglas Green asked me to join him in offering this trip as a photo tour/workshop, I jumped at the opportunity.

The above picture was taken from the air, but just look at it for a minute. In mid-summer there will be large sand bars to get out and walk on and photograph from. The colours and shapes of the landforms are dramatic. Big Horn sheep and eagles (and much more) abound. There are the grasslands to hike up on and explore. There are salmon in the river which will provide sustenance for us. There will be so much to see and do – and photograph.

This will be amazing. I hope some of you will join us.

For more information visit my tours and workshops page on this site, or visit
http://jetboatadventures.com/ to register.

In my next Newsletter I will talk about the “workshop” aspect of the trip.

4. Bowron Lakes Ski Adventure:  Part I.  What a great trip!

Skiing toward Wolverine Mountain © Chris Harris
Photographer’s notes: Knowing Bowron Lake Park like the back of my hand, I know every photogenic tree on every lake! On Isaac Lake, this is one. Knowing the potential, I left the track we were skiing on and positioned myself to capture this image. Recognizing the textural beauty of the snow-clad trees on the distant mountain, I pulled out my telephoto lens to compress distance, thus creating a closer-up and more powerful backdrop for the skier. The compositional decisions to be made included how many trees on the right to include, whether to include the darker trees on the left, and where to place the skier. One could argue that I should have waited two more seconds and placed the skier against the mountain background. However, two more skiers were about to enter the picture space and change the dynamic. So I made this image and am very pleased with it. I have others with more skiers, but I enjoy the simplicity of the single skier. EOS-50D, iso 800; f-11; 1/500 sec; 100-400mm lens.

Two weeks ago Rita and I joined Dave Jorgenson and Cherly Macarthy of Whitegold Adventures for a 4-day back country hut to hut ski adventure in Bowron Lake Park. Joining us was a writer from Westworld Magazine, Tyee Bridge, and I was on assignment to photograph it.

We pulled our gear on sleds because it’s much easier than carrying it on our backs, and we spent our cozy evenings in old trapper cabins. It was an incredible experience in a spectacular part of the province, as you will see over the next newsletters.

Exploring the Interior Rainforest. © Chris Harris
Photographer’s notes: Analyzing  the features of the forest, the placement of the skier, and the timing in releasing the shutter to capture the separation of legs to depict action, were my primary photographic considerations. If your timing is off, and both legs appear as one, the skier will look as if he/she is about to lose balance and do a face-plant. Not good! The ‘ luck’ part of this image is that Tyee was wearing green pants, NOT red!! Canon EOS-1Ds Mk.III, iso 400; f-8; 1/125 sec; 24-105mm lens.

My only photographic wish for this trip was that a heavy wet snow would laden the trees, thus creating a ‘Christmas card’ landscape. Mother nature did not disappoint. From our cabin on Isaac Lake, nestled in the interior rainforest of the Cariboo Mountains, a small group of us headed out for an exploratory ski through this beautiful forest. With no sled attached I was easily able to jump about, positioning myself to capture meaningful compositions. 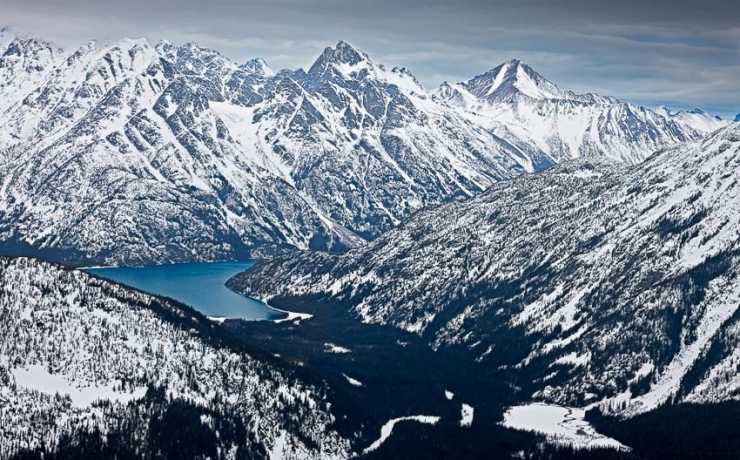 The Southern end of Chilko Lake © Chris Harris
Photographer’s notes:  I was shooting through the Plexiglass trying to avoid reflections. I shot everything as possible HDR images just in case. Back in the darkroom I could decide on processing the image from a single frame or as an HDR image from the three frames I was making at different exposures (each exp. had a 2-stop differential). I did process them both ways and prefer this version which is an HDR. It has less contrast and brings out more detail, especially in the distant mountains. The challenge is the sharpness of the closest mountains on either side of me which are moving past me much faster relative to the distant mountains which we are approaching directly. Canon EOS-1Ds Mk.III, iso 800; f-14; 24-105mm lens. HDR.

This is a continuation of my article ‘Directional Light’ in Newsletter #79 when I flew with helicopter pilot Brian Allen from Whistler to Chilko Lake. After flying over the highest peaks of the Coast Mountains we dropped down into the Chilko Lake valley. This was the first time I had ever seen the southern end of Chilko Lake. 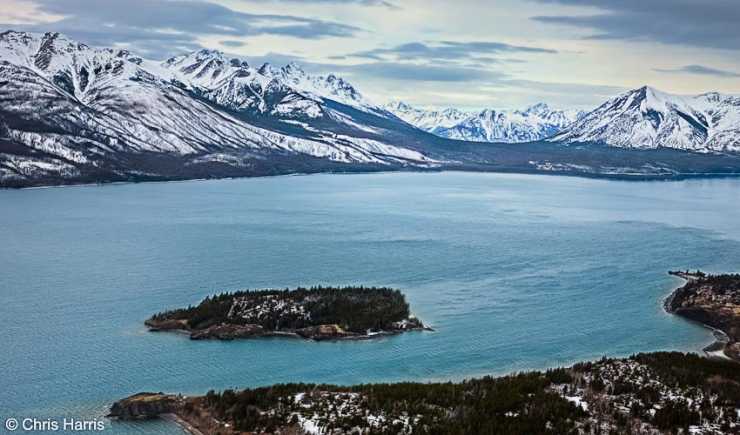 Photographer’s notes: When I saw the little island approaching I felt I had an extra element to give balance and strength to the overall composition. I placed the island to the left of centre to provide a sense of balance with the gap in the distant mountains. Canon EOS-1Ds Mk.III, iso 800; f-8; 24-105mm lens. HDR.

The day was overcast but visible in the distance is the blue sky beyond the mountains, which provided the directional light and the high contrast images I shared with you in my previous Newsletter. While flying north along the eastern side of Chilko Lake I made this image in the same manner as I did with the previous Chilko image above. This was also processed as an HDR. 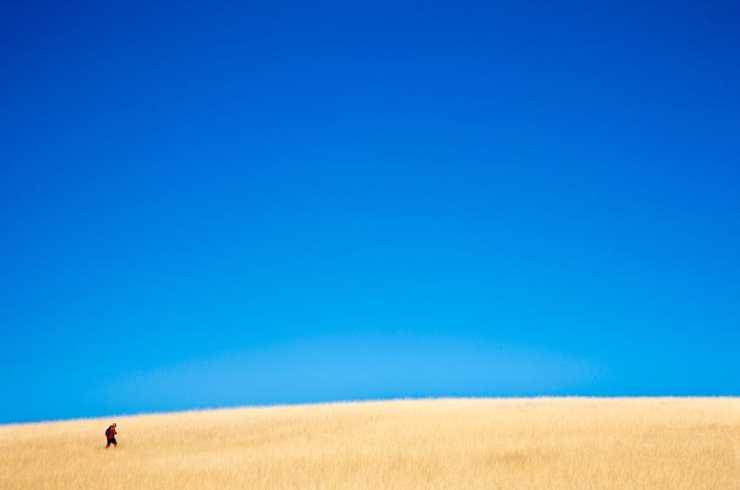 Hiking in Grasslands © Chris Harris
Photographer’s notes: Where to place the horizon line is always a compositional question. Shoot high, with the horizon line close to the bottom, or shoot low and place it close to the top of the picture space? Each approach will communicate something entirely different. Here I wanted to express the wonderful feeling of hiking in endless grasslands in wide open spaces. To express this I placed the hiker in the far left, and the horizon near the bottom.  I know I’m biased, but when I look at this photograph, I just crave to head out to the grasslands and walk forever! Canon EOS-1Ds Mk.III, iso 200; f-11; 1/200 sec; 24-105mm lens.

In mid February, with the sun low on the horizon, and the light  warm, Mike Duffy and I went for a long hike through the Chilcotin grasslands. These grasslands, themselves a wonder of the natural world, are situated in the eastern part of the remarkable Chilcotin Ark. The Chilcotin Ark is the world’s largest temperate intact environment, with the greatest bioclimatic diversity. As such, it could become the largest global refugia as global warming continues. The Ark will become a major part of my final and largest publication, which will cover the entire Cariboo Chilcotin Coast region of British Columbia.

Lone tree in the Grasslands © Chris Harris
Photographer’s notes:  It’s important to make compositions that express what you are trying to communicate. Take note of the differences in how you react when you look at the two images above, and then carry those thoughts with you when you go out to photograph. Try it and analyze your results. It’s the best way to learn. Canon EOS-1Ds Mk.III, iso 200; f-22; 1/100 sec; 24-105mm lens.

This image speaks more about  the grass itself. These grasses are in pristine condition, tall and thick. Compared to the image above, you might not want to hike through these grasslands. It looks more challenging, and the mere thought of trampling through such pristine grass might be too much for you.  The mere placement of the horizon can make a huge difference in what you are trying say and how it is interpreted.