This is a special Newsletter about my trip to San Francisco.

Thank you all who wrote inquiring about the photographic award I received last month. In response I include a copy of the press release put out by the Cariboo Chilcotin Coast Tourism Association. It was a great event and I was deeply honoured to be recognized and to receive such a beautiful gift. 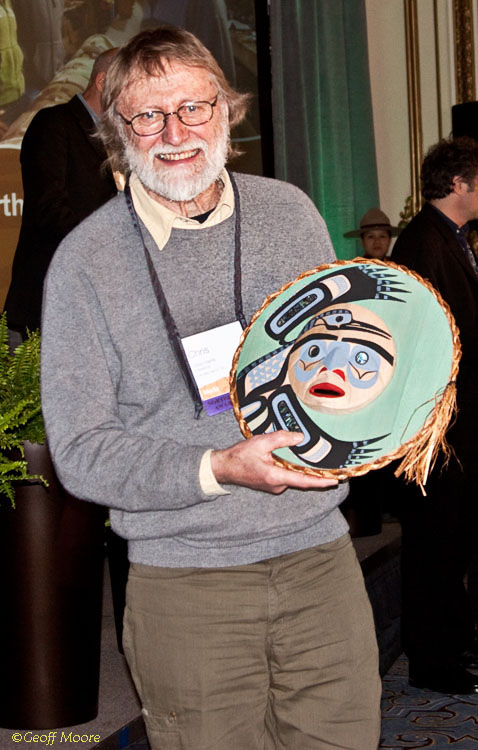 Each year the Canadian Tourism Commission (CTC) hosts “Canada’s Media Marketplace” as an opportunity for Canadian travel providers and government representatives to present our country and its destinations to U.S. travel writers, journalists and photographers; both freelancers and trade publications.

As part of that event, which is a no-holds-barred extravaganza of Canadian culture, food and wine, art, city life and adventure travel destinations, the “Northern Lights Award” is presented. This award is given to several categories of travel journalism, both writing and photography.

This year, Chris Harris won the Northern Lights Award for photojournalism for the article titled “Itcha Ilgachuz” which appeared in “British Columbia Magazine Spring 2009” in collaboration with writer Larry Pynn. The story features a horse pack trip with Roger and Wanda Williams of Six Mile Ranch Outfitters, up to the Itcha Mountains in the West Chilcotin in Itcha Ilgachuz Provincial Park.

Each year the Canadian Tourism Commission has the good taste to give works by Canadian artists as the Northern Lights prizes, and this year was no exception, with gorgeous masks by Nuu-chah-nulth artist Patrick Amos awarded to first-prize recipients.

This year’s photojournalism prize was a follow-up on 2007, when Harris received this same award for “Fields of Gold”, which featured the grasslands of the Cariboo Chilcotin and also appeared in British Columbia Magazine.

Chris Harris is a freelance photographer living in the Cariboo at 105 Mile; where he owns and operates a gallery of his own work. The gallery features fine art prints and is the home of Country Light Publishing, where Chris Harris has independently published ten very successful books of his own work. On October 16 his new book Motherstone; British Columbia’s Volcanic Plateau will be released in 100 Mile House.

Patrick Amos is a well-known Nuu-chah-nulth artist from Hesquaht and Mowachaht First Nation on the West Coast of Vancouver Island. His work includes: silkscreen prints, drums, alder, red and yellow cedar masks, bentwood boxes and totem poles. He has been carving for over 30 years and his work is collected worldwide.

2. San Francisco as I Saw It

Apart from the award banquet and some special events, Rita and I spend the best part of 4 days walking and exploring the beautiful city of San Francisco. I brought my light weight Canon 50D camera and a single lens; a 24-105mm. Photography was certainly not a priority, but whenever I saw something that grabbed my eye, I would just stop and make the image. 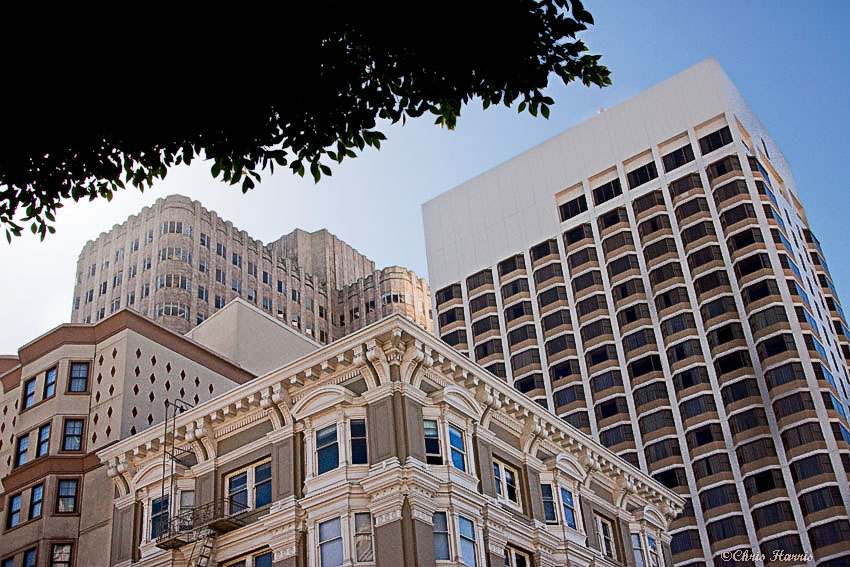 When editing the images back home, it was interesting to note what subjects I had been most attracted to. Not surprisingly, it was not people. I have always found it hard to enter into other people’s personal space.

Also, not surprisingly, just as when I am in the natural world, I was most attracted to form, pattern and tonality. In the above photograph I was drawn to the juxtaposition of these different shaped structures, their lines, the gradation of tones, as well as the old and new architecture. 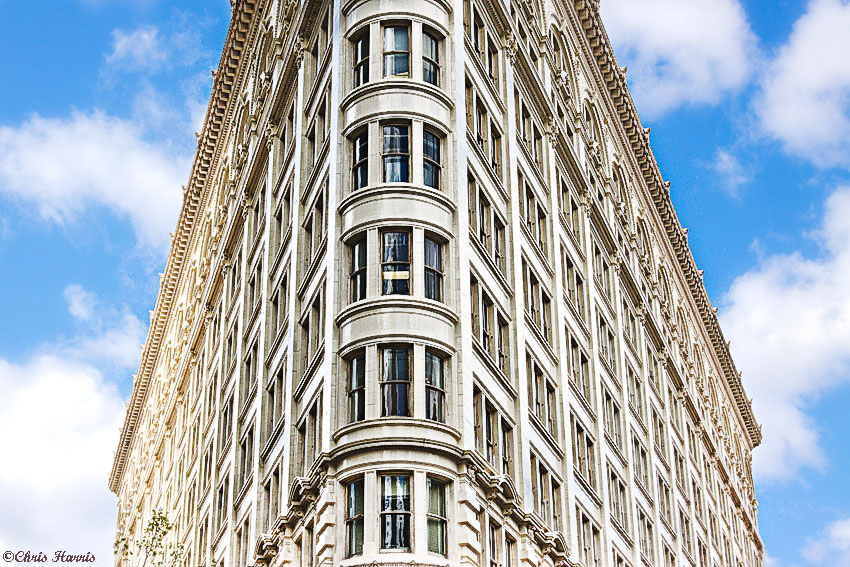 I thought the architecture and design of this building was stunning. I remember deciding not to include the very top of the structure as the perspective was too extreme. Instead, I stepped out into the street in order to try and capture the symmetry of the building. The element of good fortune in this image was the nature of the clouds. Their light fluffiness and irregular shapes add contrast to the solid structure of the triangular building. 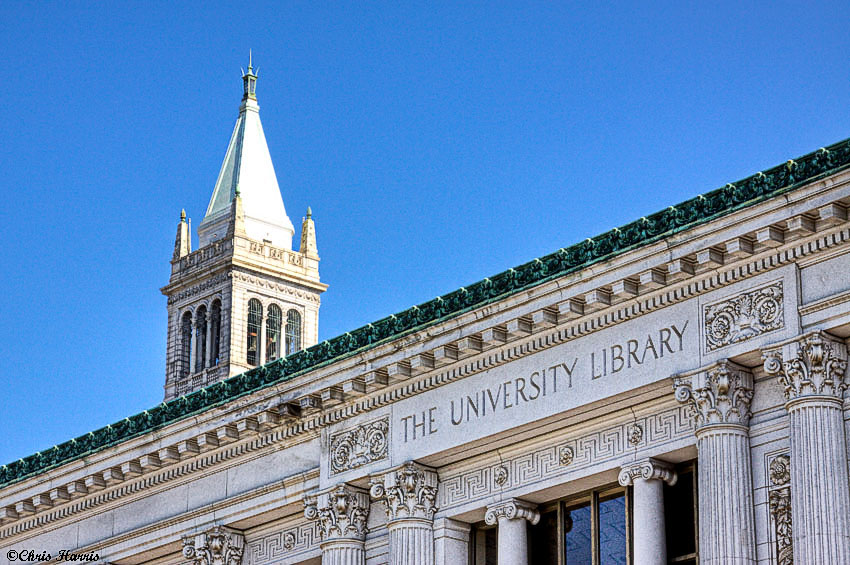 While walking through the university campus at Berkeley, I noticed this composition with its emphasis on line and shapes. Look closely at all the lines; vertical, diagonal, and horizontal. Without a tripod where one takes the time to study composition, I remember paying close attention to the placement of the major shapes while at the same time considering the major lines. I was also aware of colour; the green line against the blue sky. 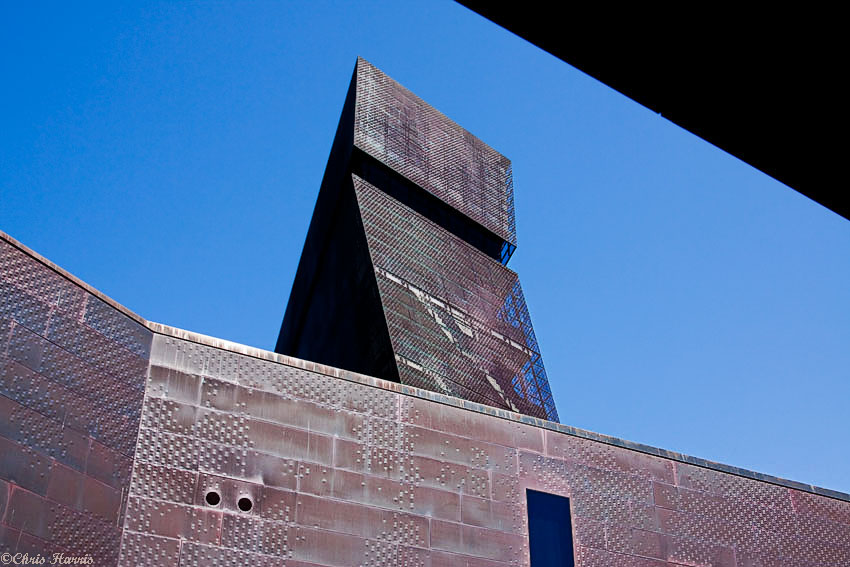 During our last day in San Francisco, Rita and I visited the De Young Museum. I was just about to enter the museum when I looked up and saw an extraordinary array of shapes, lines, colour and tonality. Apart from the number and arrangement of shapes; there are circles, rectangles, triangles, and parallelograms. There is also the contrast between white and pure black. It is both simple and complex. It is compelling yet ordinary.

This was the one image I made of the natural world. While walking through the university at Berkeley, we found ourselves in a Eucalyptus forest which contained the tallest trees in Oakland. The bark patterns were amazing. If I was ever to return to the San Francisco area, I would bring a tripod and spend some serious time photographing these trees. They were beautiful.

I found it very interesting to write this Newsletter. As a nature photographer, I rarely ever photograph urban landscapes. I looked at these images over and over, studying them, and wondering what it was that moved me to capture a collection of images such as these.

I didn’t head out each day with city architecture in mind, but it is now obvious that what attracted me the most in San Francisco, were its physical structures. As with all photography, the gift of light provides us with a vast array of shapes, lines, textures and tonal contrast. As photographers, it is our job to arrange them in ways that resonate with our soul.