1. The Story Behind the Image

In 1998 I was photographing the gold rush town of Barkerville, BC’s largest historical site, for my book Barkerville: British Columbia’s Heritage of Gold. St. Saviour’s Church, an iconic structure, is the oldest continuously-used church in B.C., and I wanted to create an image that would stand out amongst the thousands that are made of this church. 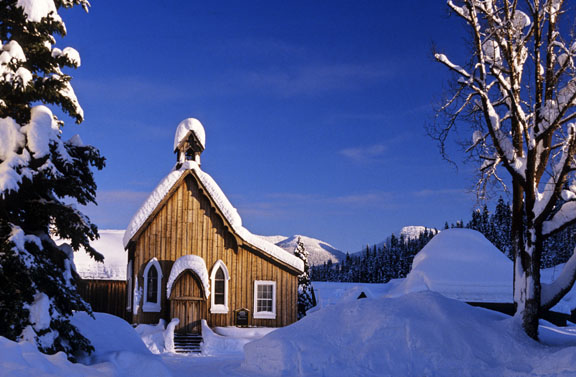 As I have mentioned in previous newsletters, to create photographs that truly reflect your own personal vision, you often need to pre-visualize them, much like painting artists create paintings in their mind and then go to the studio to paint them. Photographers can do the same. On a crisp, clear and cold winter day while photographing in Barkerville, an image suddenly came to mind. I imagined a moonlit St. Saviour’s Church on a clear, 40-degree night. I could see it clearly in my mind – next I just had to create it.

I studied the scene above and made note of what conditions I required to make this image. I needed a perfectly clear day, I needed to make the first image (I was using film) at approximately 2-3 pm when the sun would cast its light from the upper right, creating shadows off the roof line (later to become a moonlit shadow), I needed a composition that allowed me space to put the moon, and finally I needed a clear full moon night for the second image that I would expose on top of the first exposure. With all this in mind, I began the process.

When the perfect afternoon arrived, I set my camera near ground level on a tripod. Using a wide-angle lens, I made several exposures varying from 1 f-stop under-exposed to 3 f-stops under-exposed in ½-stop increments. I did this to darken the sky and thus make it look like a late-night sky. I then took the film out of my camera (leaving the film leader out of the canister so I could later reload the same roll), and made notes in a notepad as to exactly where I wanted to place the full moon and how large I wanted the moon to be.

Several weeks later (I was now at home and 300 kms from Barkerville), I finally had a clear full moon night. I reloaded the original roll of film, and put a 200mm lens on my camera (I chose this lens to create the size of moon I wanted – the longer the lens, the larger the moon), set my alarm and went to sleep. Up in the night when the sky was dark, I set up my tripod & camera and exposed the moon in the spot of the picture space I had recorded in my notes. I exposed the moon (1/250 sec. @ f 2.8 using 100 ISO film) in each of the original afternoon exposures.

When my film arrived back from the lab, I anxiously placed my slides out on the light table. All that was left to do was choose the best exposure that best represented a dark moonlit sky. That is why I made several different under-exposed images that afternoon in Barkerville.

So, that is the story behind "St. Saviour’s Church by Moonlight". It is available as a Limited Edition print at my Gallery or on this web site. In this Newsletter, I am using it as my Christmas card below!

2. Our Christmas Card to all of you

The Spirit of the Season!

3. Make this Your Christmas Card Too!

Doris Blanchet of 321forkeeps.com very kindly made the image described in Section I into the Christmas card above, titled The Spirit of the Season. If you would like, you can visit her site and use this image for your very own card this Christmas Season. There are others to choose from as well.

Merry Christmas and a happy holiday to everyone! It’s the season for friends and family; a time to walk with loved ones, and a time to relax with a good book in front of a cozy fire. For us here in the Cariboo region of central British Columbia it’s also a time to ski, snowshoe or take a sleigh ride through the snow clad countryside. To all of you, wherever you live, we wish you the very best during this holiday season. Blessings to all. 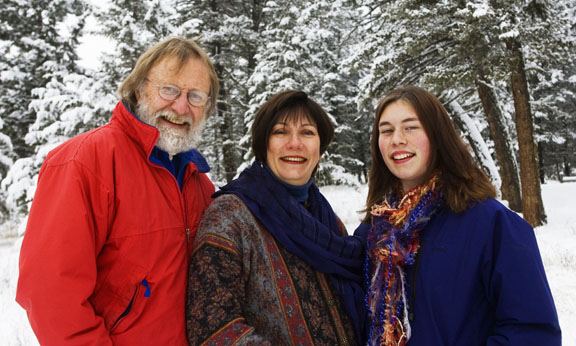 Chris, Rita and her daughter Teresa