This past year I was contracted to create imagery for www.SouthCaribooTourism.com. The imagery will be used to help promote the South Cariboo region that extends north-south between Lac La Hache and Clinton along Highway 97 and between the Fraser River in the west and the Cariboo Mountains in the east. As is typical, I’ve overlooked my own spectacular region in favour of what I imagined as more exotic further afield. So this year I would like to share with you my discoveries closer to home and encourage you all to visit us on your travels. 100 Mile House is the hub of the South Cariboo and the above web site is where to go for complete information.

Last month I headed east from 100 Mile House to The Wolf Den at Natitsilik to photograph a day of dog sledding. As I approached this beautiful log home, set amidst aspen trees and overlooking the Cariboo Mountains, I was welcomed by Laurie Neidermayer, owner of The Wolf Den and over 100 husky dogs howling in the distance. What a reception! If I wasn’t already excited about my day, I sure was now. Close to 100 purebred Siberian Huskies were all telling me one thing – that they all wanted to take me out onto the trail and provide an experience of a lifetime – and that they would do (well, eight lucky ones did)! After a cup of morning coffee and an introduction to my wonderful guides for the day, Alison Grundy and Mathew Gale, we headed off.

The most challenging aspect of photographing the dogsled was not knowing the route. I wanted to shoot some images from in front and others from behind but where were the best places to do this? My guides Alison and Mathew were absolutely fabulous in describing the route and helping me find the best spots. After an exciting two hours of dog sledding through the fir and aspen forests we headed out onto a beautiful lake where we had lunch in the warm sun. In the afternoon I photographed from within the sled, feeling the energy of the dogs and thoroughly enjoying the silence of this wonderful mode of transportation.

2. The Story Behind the Image

I thought I would share the story behind the image below because it was recently purchased as a large print to hang at the entrance to a corporate office. So the question to ask yourself about this image is – does it speak to you about slowing down or speeding up? Knowing the executive who purchased the print, it probably means something like: if you enter this office and slow down, expect to be left behind because the competition is blasting past you – let’s get on with it! Let’s get the job done!

While driving home through the darkness of night, accompanied by the many semi-trailers (large trucks for those of you in Europe) on the road, I found myself dreaming up new photographic images to create. Why, what else is there to do in the middle of the night? Most of my pre-visualized creations are dreamt up while driving and that is why I always carry a small digital recorder. If I don’t record the ideas I forget them, much like dreams.

It was a semi-trailer that passed me with a huge display of lights that triggered this idea. Because they travel at such high speeds, I envisioned an image that captured their speed juxtaposed with a "slow" sign on the highway. Once I had figured out in my mind how I would create it, I began to look for the perfect "slow" sign. I wanted one on a sharp turn that would force the drivers to brake a little, thereby adding more red lights!

The pre-visualization of photographic imagery is a very important step in the development of your photography. If you wish to take your hobby beyond the documentary stage, try creating photographs in your mind, much like a painter would do to create a painting in their studio. 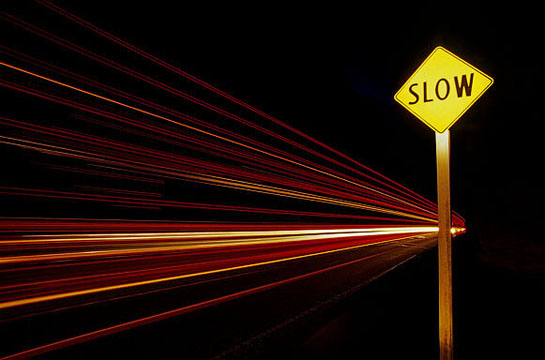 3. What I See and How I Photograph

In response to continued requests for my photo seminars, I am now bringing them online as an ongoing feature in my Newsletter. They are designed to give you techniques and insights gained from my experience in the field in the hope that they inspire you in your own image making.

I am going to carry on with the above image to show you how I made it from a "creative techniques" perspective.

Once I had the idea, I drove until I found the perfect sign on a turn that would force the truck driver to put on his brakes. I set up my tripod, composed my image and set my camera on "time exposure". This meant that the shutter would remain open for as long as I held it open using my cable release to avoid camera shake. Once I opened the shutter, the first thing I did was paint the "slow" sign with my Maglite flashlight using the same technique I described in Newsletter #20: Painting with Light. Then, all I had to do was wait for several semi’s to drive by. To ensure no extraneous light reached the film (from moon, stars and light in the sky) I cupped my hand over the lens and waited. As soon as a semi-truck approached I would remove my hand so that the truck lights would be exposed. Using the same technique, I left the shutter open for about 30 minutes until several trucks had passed by. By doing this, I would ensure a large number of streaking lights. I also exposed one oncoming car so as to record one streak of white light for my final composition. So that is the story behind The Slow Sign and its creation with the illusion of speeding vehicles.

This print is now available as a Limited Edition print at the Gallery.

One of the more challenging aspects of putting a coffee-table book together such as the upcoming Grasslands book is the choosing of imagery. There are several thousands of images to choose from and the final choice can determine the books success or failure. Lets look at two images in terms of their visual design, for it is with good use of line, shape, texture and perspective, that I am not only better able to express my personal feelings but also to evoke an emotional response for the viewer as well. The final composition of the landscape must find a meeting place with our inherent sense of the aesthetic. We look for balance, harmony, and rhythm.

In the above image, I was able to detect three main shapes from within the large landscape I was looking at. To me, each shape expressed something unique about the grasslands, however, the top shape was over two kilometers away and had little impact compared to the shape in the immediate foreground. To give them equal strength, I used a long telephoto lens to compress distance.

I really enjoy this image. It speaks to me because I accomplished exactly what I set out to do when creating it and I love the texture, the lines and the shapes within the picture space. But that’s my perspective. The most important question in regard to this project is; does it speak to the viewer?

In this image, the main compositional elements are the diagonal lines that sweep down from the upper right. These oblique lines create a sense of dynamic and movement, compared to the more horizontal and thus more static lines in the previous image. One can almost see and feel the water draining off the upper grasslands on its way to the Fraser River below. The shadows and resulting shapes created by the low angled side-lighting together with the oblique angle at which the image was taken, also create a sense of depth. The "straight on" perspective from which the first image was taken, resulted in a rather flat, one-dimensional, and static image.

Because I made these images and have strong attachments to them, I asked friends for their thoughts. By doing this and listening to their comments, I was able to remove myself emotionally and analyze them more objectively.

Although both images are rather abstract, the dynamic of the second image draws us in, evoking a response to the grasslands. For this reason, it will probably make its way into the book. 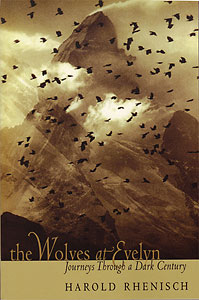 5. Upcoming Book Event at the Gallery with Harold Rhenisch

You may remember that Harold Rhenisch celebrated the release of The Wolves at Evelyn with a reading here last October. We have just been told that "Wolves" has been short listed for the Hubert Evans non-fiction prize by BC Book Prizes. YAY! Harold!

We felt this is worth celebrating all over again, and we know there were many who were Very Disappointed not to be here for that, so we’re doing it again. Harold has graciously agreed to spend an evening presenting The Wolves at Evelyn here at the gallery on May 1. We will post confirmation and details in the next Newsletter. Meanwhile, we congratulate Harold on being short-listed and look forward as always to a great evening with him! BC Book Prize 2007 finalists.

6. A Few Happenings We Want To Tell You About

Although these are not events at the gallery, we are excited to share them with friends, since they feature my daughter Anna and her husband Richard.

House of Life: this is a program that Anna and Richard developed and have performed several times in the last few years. It is unique in concept, in that Richard sings the song cycle House of Life; the musical settings by Ralph Vaughn Williams of sonnets by Dante Gabriel Rossetti; while Anna provides literary interpretation of the poems. Richard’s stunning baritone and Anna’s intelligence, passion, and humour, and because this is such an extraordinarily beautiful work, mean that this is a real treat. It’s definitely the antidote for anyone who had a boring time in high-school lit. class. We were in Christ Church cathedral in Vancouver last week for the performance, but are determined to bring them to 100 Mile House. If we manage it, details will appear here.

Anna’s debut as a published poet will be on March 21 at the launch of Room magazine in Vancouver. This magazine was Room of One’s Own, but are marking their 30th year with a name change and a new look. Anna’s poems will appear in the first edition of the new format and she is one of the featured performers at the launch along with Elizabeth Bachinsky, Diane Haynes and Mary Kastle. Are we proud? Shamelessly.
All are invited to this event. It is Mar. 21, 7:00 p.m., Centre A, #2 W. Hastings St., Vancouver. Admission is Free. Info and directions.

Rigoletto: Richard has produced, directed and is performing in a fully staged performance of this opera; sharing the role of Rigoletto with good friend Andrew Greenwood and featuring a talented and accomplished cast from around the lower mainland. This is a "black-box" or minimalist setting in an intimate space and promises to be a delightful evening of music.

There are four performances from Mar. 27 to Apr. 3; at Redeemer Lutheran Church on 1499 Laurier Avenue (off of Granville St.) in Vancouver.
For tickets and details phone 604-646-0406 or email operaprocantanti@hotmail.com