Notify me when a new newsletter appears on this site

Early Spring: A trip to the Fraser & Chilcotin River Canyon lands – Part I

Although this book project is about the grasslands of British Columbia, the majority of image-making will take place in the grasslands of the Cariboo-Chilcotin region – the largest and most pristine inter-montane grasslands remaining in North America. So why am I going to the Canyon lands to photograph the grasslands? Well, in this region, the grasslands and canyon lands are inter-connected and inter-dependent. The deep canyons of the Fraser and Chilcotin rivers get extremely hot during the summer months and they both influence the climate of the adjacent areas. This produces a climate that is more conducive to the growth of grass than forest. The two prime grassland areas are in the Churn Creek/Gang Ranch area and the Sheep Range Junction/Farwell Canyon area. These are the areas we’re about to visit. 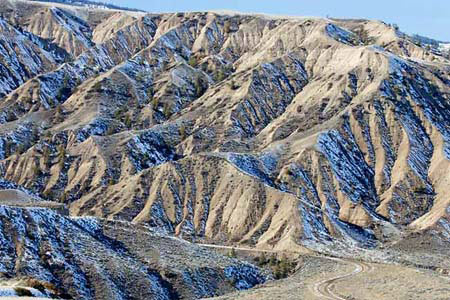 A Dusting of snow in the Grasslands

In late February, I headed out to the mid-Fraser canyon and grasslands in the Churn Creek area. There wasn’t much snow this year, but what snow there was revealed the landscape as I had never seen it before. What we see above is a smattering of Big sage, Rabbit-brush and a variety of grasses set amidst a landscape carved by erosion. The image also shows the road I was about to travel on once I had crossed the famous Gang Ranch bridge. 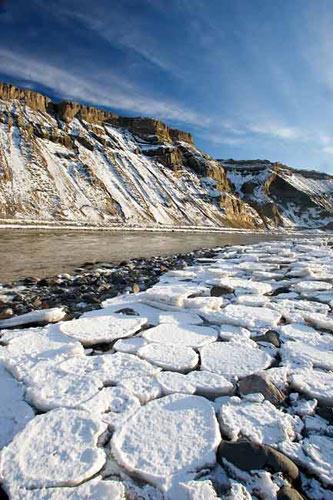 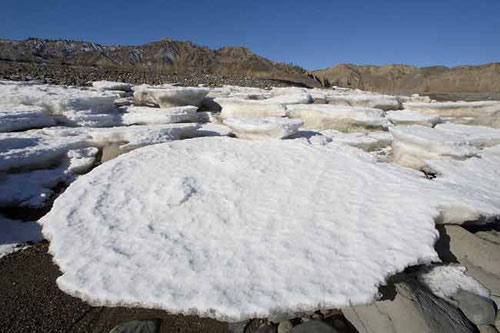 Although I had my eye on the frost-covered grasslands, I was drawn to the larger landscape along the Fraser Canyon. Here I found beautiful circular ice formations. I was fascinated with their shapes and began to photograph them from every perspective possible – using a variety of lenses. 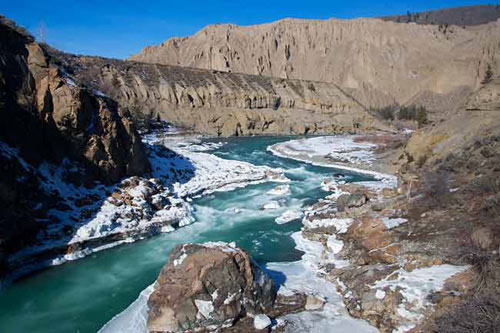 A few days later, I drove out to Farwell Canyon to see how the ice formations along the Chilcotin would compare to those of the Fraser. The setting is equally spectacular with its backdrop of hoodoos and glacier-green water. 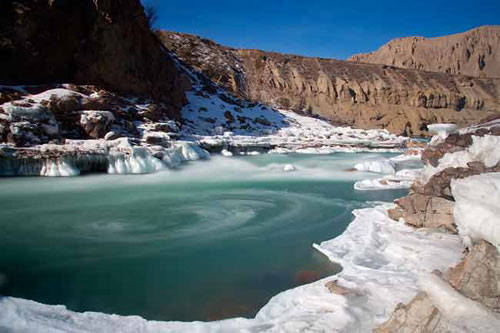 An Eddy of Ice

Once I had climbed down an icy cliff to water level, I made my way along the river watching the white chunks of ice flow through the glacial green waters. Suddenly I found myself staring into a giant eddy with ice going round and round, trapped from the main stream. I believe the most important aspect to creative photography is the ability to pre-visualize. Although I have never seen an image similar to the one you see here, my experience with slow speed image-making allowed me to pre-visualize this very outcome. To accomplish this, I needed to make a very long exposure that is impossible on a bright sunny day. So what I had to do was fool the camera into thinking it was dark out. To do that, I used a polarizer and eight stops of neutral density in front of my lens. Only then could I make a long enough exposure (about 15 seconds) to show the ice moving around in a circular path.

In Part II of this feature story, (in Newsletter #2) I’ll take you beyond the large landscape. I’ll put on my macro lens and show you a world few of us get to see. In Part III, I’ll take you into the extraordinary world of pure abstraction.

A Walk in the Grasslands – Part 1 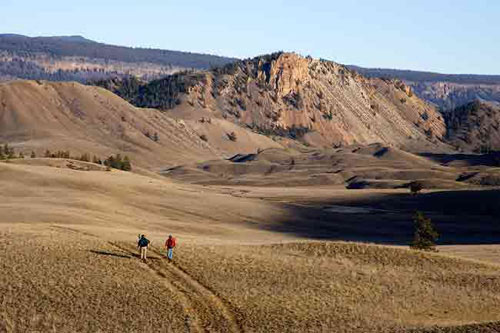 Heading Out to the Grass

After the snow had melted, Ken Mackenzie (wildlife biologist) and Ordell Steen (grassland ecologist) took me out into the Churn Creek area to look for California big horned sheep. It was spectacular beyond belief. 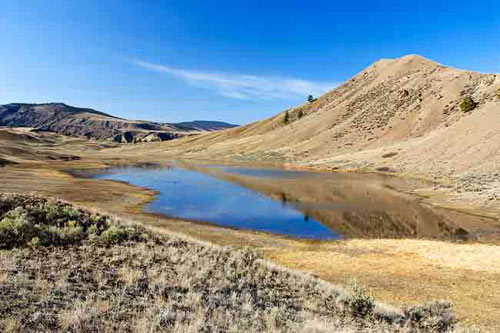 A Jewel in the Dry Grasslands

Along the way we passed beautiful small lakes that would soon dry up under the desert-like heat. This lake is actually called Dry Lake, but due to the frost still in the ground and the quick spring run-off, it created a marvelous water reflection in this dry desert landscape.

This landscape of grasses and sage is not one usually promoted by Tourism British Columbia. There are no glaciated mountains and crashing ocean surf here. Instead, there is silence, tranquility and the smell of sage. This is the gift of the grasslands landscape.

On the way back to our vehicles, the evening light spoke to us. It made us realize what an amazing day we had shared out in the grasslands. This may not be the British Columbia that you see in travel brochures, but one day it will be. The grassland environment is one of the great hidden treasures still waiting to be discovered.

On March 15, 2005 at The Lodge Conference and Retreat Centre in 100 Mile House, the Grasslands Conservation Council of B.C. (GCCBC) in partnership with myself, officially launched the Grasslands Awareness Project. The main goal of this project is the publication of a major B.C. coffee-table book on the Grasslands of British Columbia. The presentation included a power point presentation by grasslands ecologist Kristi Iverson in which she described the grasslands from a global perspective to that of the grasslands in B.C. This was followed by the feature presentation on the Cariboo-Chilcotin grasslands that included a slide-sound show. The evening was also a fundraising event. The response was overwhelming. One lady offered to initiate an artists retreat in the grasslands which is to end up as an exhibit to promote the project. A gentleman volunteered to be an official fundraiser for the book project while yet another gentleman offered to sponsor a 500 mm IS telephoto lens in order to capture the endangered birds and animals which depend entirely on the grasslands. There were many other donors as well and they are being rewarded with a tour to the grasslands with a grasslands ecologist and myself. All-in-all it was a most encouraging evening . . . a great one for the grasslands and for the book project as well. Thank you so very much from all of us.

The evenings presentations will follow the same format as the presentation described above. The overview of the ecology and biology of native grasslands will be provided by local resident and GCCBC director Ordell Steen. This will give everyone a sense of the complexity, fragility and irreplacability of the grasslands landscape.

I will then take you out into the Cariboo-Chilcotin grasslands to share my stories and photographic adventures. There we can all explore the beauty and the majesty, grasp the vast distances, and experience the fragile beauty of wildflowers, butterflies, birds and animals that are the essence of the grasslands. It is this combination of information, inspiration and appreciation that this joint project brings to the broader public in its goal to save this precious feature of our heritage for our children. Please join us. 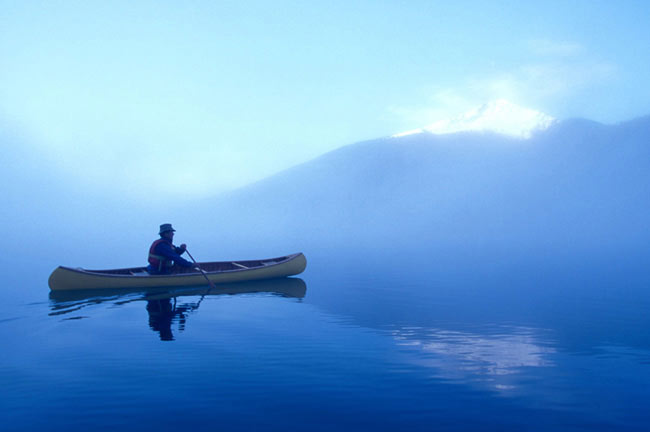 Each year I lead one or two photo-canoe tours in world famous Bowron Lake Park. It was the subject of my first book publication that was released back in 1991. This year I have two departure dates:- one from June 18 to 25 and the other from September 3 to 10. If you are interested in combining soft adventure with an opportunity to improve your photography, please join me. I have paddled around the Bowron Lakes well over 100 times during the past 30 years and I still love the journey with a passion. I’d love to share the adventure with you. There is only one more space available on the September departure but more on the June trip. Don’t be disappointed – sign up soon. It’s a trip of a lifetime!