Sharing Memories of the Cariboo Chilcotin Coast: I have explored this region of BC by foot, canoe, vehicle, skies, raft, snowmobile, horse, and by airplane, and I have photographed every experience. All together they have given me a ‘sense of place’. I feel most fortunate to live and have access to this ‘place’. The images I share with you on this blog are memories of many of those moments in time. 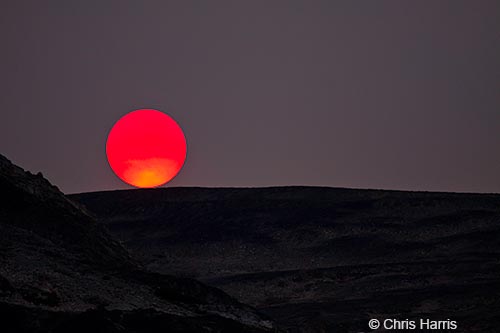 A ball of molten lava or the sun?

Last night on the Knowledge Network, I watched an incredible documentary titled Amazing Planet, produced by National Geographic. It was the story about lava and its role in creating the Earth as we now know it. The book Motherstone which I published in 2010, was also the story about lava; not of the whole planet, but as it pertains to the Cariboo Chilcotin Coast region here in central BC.

As I walked with my dog this morning, the visuals from the film were still with me, and I kept thinking about the image above which I made on a hiking expedition in the West Chilcotin in 2010. To me it was like a ball of molten lava, rolling over the surface of the planet.   At the time, I  swear I could feel the heat radiating from it.

In fact, the ball is the fiery sun, revealing its inner core through the dense smoke of a nearby forest fire. I remember choosing my perspective so as to make the setting sun look as if it was rolling over the planet. It was a powerful moment in time, one I will never forget.